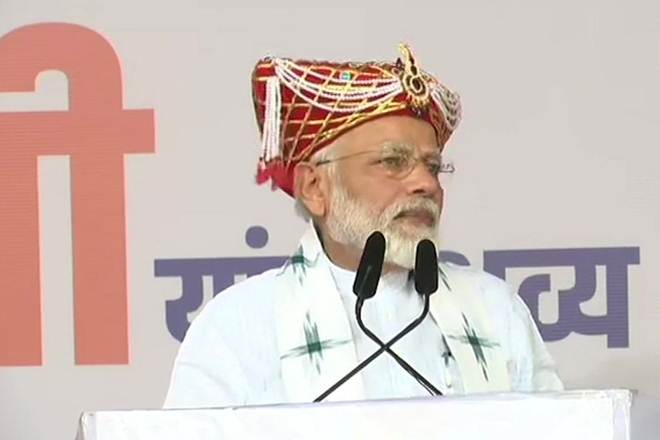 Speaking at a rally in Nashik, Maharashtra on Thursday, Prime Minister Narendra Modi highlighted the key issues that India is faced with right now. He was addressing the BJP rally in Nashik to mark the end of Chief Minister Devendra Fadnavis’s Mahajanadesh Yatra ahead of Maharashtra state elections.

He spoke about his vision for Jammu and Kashmir, one that embraces Kashmir and recreate it as the “paradise” it once was. He spoke about the people of J&K and called out to all the citizens of India to come forward and be a part of the rebuilding of Jammy and Kashmir. He urged people to embrace them as their own, as they have suffered for decades and turn the valley into ‘jannat’ or heaven, again.

PM Modi referred to “Kashmir hamara hai” slogans at a BJP rally and said it was now time for the rest of the country to embrace Kashmiris. When he asked the crowd if they will come forward, the crowd roared back with a positive answer.

He reiterated the government’s view that the state had lost out on much of the benefits that the rest of India gets. The end to special status will remove the obstacle to implementing laws that are in place in the rest of India and open the path to bring in various Central projects that help various sections of people in other parts of the country.

He did not spare the opposition too and said that opposition parties were trying to derive political benefit over the government’s decision to abrogate Article 370 of the Constitution. “This decision, aimed at strengthening the country’s unity, will also help the people of Jammu and Kashmir to realise their aspirations and dreams,” PM Modi said.

He also spoke about ushering in a new era pf development.

PM Modi questioned the role of Congress and Sharad Pawar-led Nationalist Congress Party (NCP) and questioned them over their remarks that could bring a bad name to the country in the international arena.

“I can understand the confusion of Congress but why is a senior leader and experienced leader like Sharad Pawar supporting Pakistan? Everyone in the country and the world know where are terror factories located,” PM added.