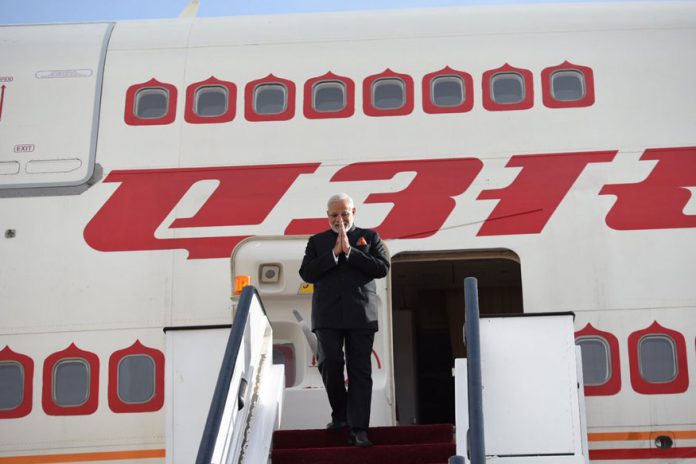 Prime Minister Narendra Modi will be on a landmark trip to the US from September 21-27.

With a huge community event planned in Houston, Texas, called ‘Howdy Modi’, where US President Donald Trump will also attend, Namo’s US trip will reinforce India’s position as a global power, which has seen enormous diplomatic gains under Modi’s leadership.

The presence of the US President at an event featuring NaMo is a big signal to the rest of the world that US stands alongside India on its global push.

With a trade and energy deal underway with the US, the Indian PM’s visit will also feature a string of meetings with world leaders on the side lines of the UNGA where he will address the world body on September 27.

Here are the key highlights of the trip and the Prime Minister’s schedule day by day.

Texas is the energy hub of the US and the PM will be meeting several business leaders of various oil and energy companies in an energy round table as India seeks to increase its energy imports from the US, that is presently valued at US $ 4 Billion. He will also look to increase India’s investments in this sector. With a Gross State Domestic Product of US $ 1.8 Trillion, Texas has a larger economy than many states including Canada. The trade between India and Texas is about US $7 Billion which is about a tenth of the total trade between India and US.

Howdy Modi: The Prime Minister will be addressing the Indian-American community at 1000 hours alongside US President Donald Trump and a host of other leaders from the US political establishment. An approximate 55,000 people are expected to attend the mega event.

Before departing for New York, the Prime Minister shall be meeting members of the US Congress.

September 23rd– The Secretary General of the UN has called for the UN Climate Action Summit. PM Modi will be addressing this summit and highlighting India’s contributions in securing a clean and green world. Some of the actions taken include, launching of the International Solar Alliance in partnership with France, plan to phase out single use plastic by 2022, fighting indoor house pollution with schemes such as the PM Ujjwala Yojana among others. The National Action plan on climate change has about 11 mission mode projects.

On the very same day, the Prime Minister will also be addressing an important conference on counter-terrorism organized by the Kingdom of Jordan in partnership with France and New Zealand. Here the Prime Minister is expected to emphasize on the challenges associated with cross border terrorism and terror financing. This assumes significance as it has been reported that Pakistan intends to approach the US to avoid being put in the FATF black list. It needs to be noted here that India has been trying to muster support for its Comprehensive Convention on International Terrorism since 1996.

The UNGA will also be holding a high-level dialogue on Universal Health coverage. The Prime Minister is expected to bring up the Ayushman Bharat scheme which has been praised by the WHO in its annual assembly meet.

September 24th– The UN Secretary General will be hosting a lunch which the Prime Minister will be attending.

The United Nations Economic and Social Council (ECOSOC), one of the six organs of the United Nations will be hosting an event titled, ‘Leadership matters: Relevance of Gandhi in the contemporary world’. PM Modi is expected to address this program. The government will be celebrating 150 years of the birth of Mahatma Gandhi this year too.

In addition to this event, the Prime Minister will be inaugurating remotely the Gandhi Solar park which has been built on the roof top of the UN headquarters in New York, the Gandhi peace garden built at the New York State University and the UN postal system which will carry the images of Mahatma Gandhi.

The last engagement of the day will see the Bill and Melinda Gates foundation award the Prime Minister for his leadership in achievement in India’s achievements in the field of sanitation. The Swaach Bharat Abhiyan launched by the government has seen a sanitation coverage close to 94% as of this year.

September 25th– The Prime Minister will be delivering the key note address at the Bloomberg Business Summit.

In a separate conference hosted by Invest India (a body incorporated by the Government of India and other private bodies), the PM will be interacting with the CEOs of 40 companies including JP Morgan, Lockheed Martin. He is expected to emphasize on India’s improved ranking in the World Bank’s Ease of Doing business report. As concerns emerge of a slowdown in the Indian economy, the Prime Minister’s personal intervention will be a much-needed relief.

September 27th– PM’s UNGA address is scheduled for the morning. He is expected to leave for India in the evening.

Apart from this it has been announced by the Foreign Secretary that the Prime Minister will be attending plurilateral meetings with the 12 nation Forum for India-Pacific islands cooperation on the 24th of September and the India- Caribbean community meet on the 25th of September.

Apart from these meetings, the Prime Minister will meeting 20 other heads of states/governments.