Home Music & Entertainment Bollywood The first poster of ‘The Sky is Pink’ is out and it... 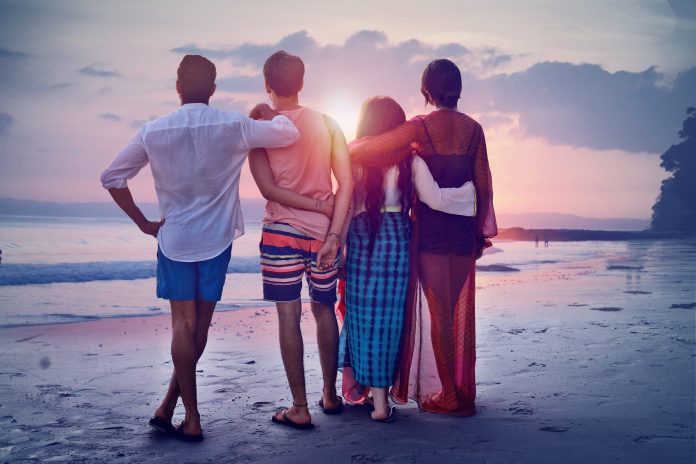 Directed by Shonali Bose, the movie will be screened at the Toronto International Film Festival on September 13.

Taking to social media, Priyanka shared the first look poster of the film which is sure to give you some major family goals! In the poster, the lead cast is seen at their happy best.

The aesthetically-pleasing poster, which radiates happiness, laughter, and love, looks fun-filled and refreshing.

The poster shows Priyanka perched on Farhan’s back who is seen giving her a piggyback ride while Zaira and Rohit run ahead of them. All in all, it teases one crazy family journey!

Apart from sharing the first poster, the ‘Quantico’ star also revealed that the trailer of the film will be out tomorrow.

“In this family, crazy doesn’t skip a generation! We bring to you #TheSkyIsPink trailer Tomorrow at 10 AM,” she wrote.

The ‘Mary Kom’ actor, before jetting off for TIFF, shared a romantic still from the film on her Instagram account on Sunday. In the picture, Farhan can be seen holding Priyanka in his arms. “Made with love and so much more!” she captioned the snap.

Farhan also shared another still from the flick in which he could be seen giving a piggyback ride to his co-star.

“TheSkyIsPink was made with not just hard work but with a lot of love and it is overwhelming to receive so much love and appreciation at #TIFF! The trailer will be out soon guys! Stay tuned,” he captioned the picture.

‘The Sky Is Pink’ marks the Bollywood comeback of Priyanka after a hiatus of almost three years. The film is based on the life of Aisha Chaudhary, who became a motivational speaker after being diagnosed with an immune deficiency order at the age of 13. It also sheds light on the love story of her parents.

The flick is co-produced by Priyanka, Ronnie Screwvala and Siddharth Roy Kapur, and will hit the big screens on October 11.

Priyanka was seen in the Hollywood film ‘Isn’t It Romantic’, starring Rebel Wilson, Liam Hemsworth, and Adam DeVine. Farhan, on the other hand, is currently prepping for Rakeysh Omprakash Mehra’s ‘Toofan’, in which he will be essaying the role of a boxer.