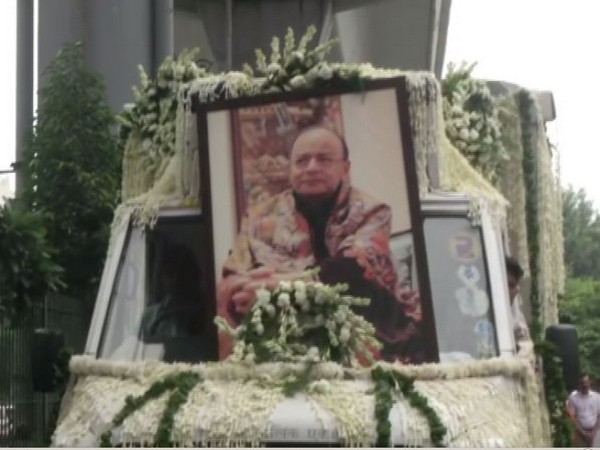 Former Union Minister and senior BJP leader Arun Jaitley, who passed away on Saturday, was cremated at the Nigambodh Ghat with full state honours in the presence of political leaders across party lines and supporters on Sunday.

The body of Jaitley, who passed away on Saturday afternoon, was brought to the BJP headquarters in Rouse Avenue from his South Delhi house in a vehicle adorned with white flowers with huge life-size portraits of the leader both at the front and back.

Remembering Jaitley, BJP supporters walking with the vehicle chanted ‘Jab tak sooraj chand rahega, Jaitley tera naam rahega’ (Your name will be alive as long as sun and moon are there).

ALSO READ: From Vajpayee to Jaitley, demise of BJP stalwarts leaves a void…

Speaking to ANI, Asquith said: “Jaitley was a man that many people in Britain treasured, knew well, worked with, valued him for his wisdom, gentleness and humour. He will be much missed.”

Ambassador of Israel, Dr Ron Malka, and Board of Control for Cricket in India acting president CK Khanna also paid tributes to the late leader.

“Jaitley was a great politician. He did what he did out of patience and love for his country. We appreciate him very much. On behalf of the state of Israel and people of Israel we pay our heartful condolences and may his memory be a blessing for all,” Malka said.

The former finance minister passed away at the age of 66 at the All India Institutes of Medical Sciences, New Delhi on Saturday. He was admitted to the AIIMS earlier this month after he complained of restlessness. He was placed under observation at the hospital’s Cardio-Neuro-Centre.