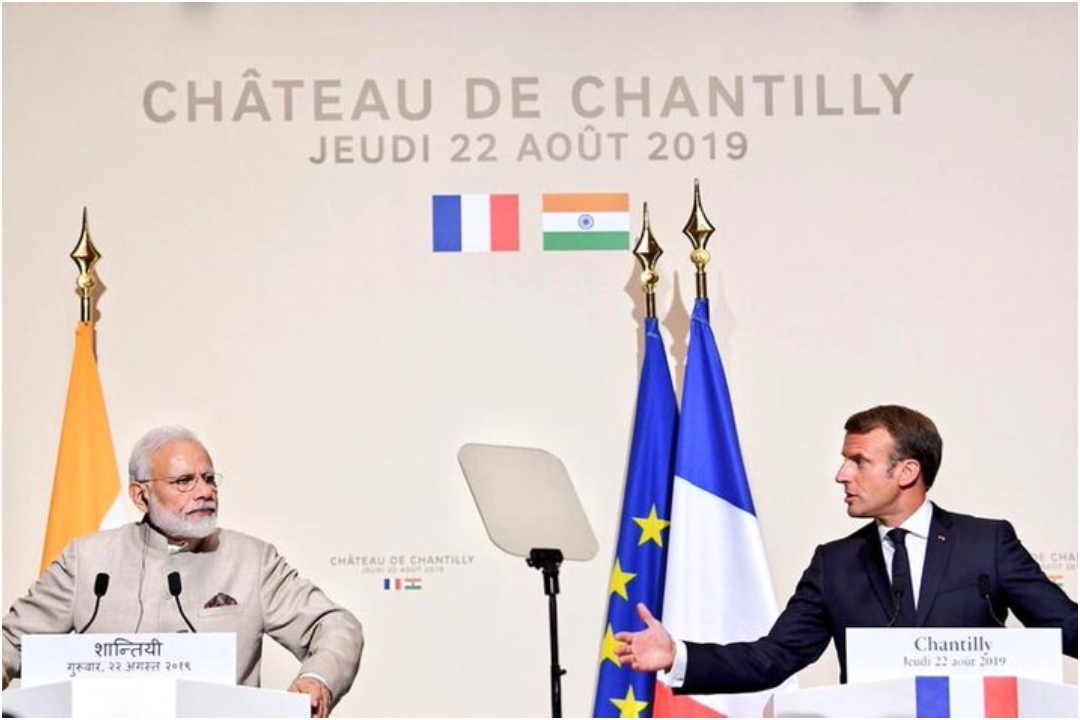 India and Pakistan should resolve the Kashmir issue bilaterally and no third party should interfere or incite violence in the region, French President Emmanuel Macron said on Thursday after his one-on-one talks with Prime Minister Narendra Modi.

The two leaders reviewed the entire bilateral relationship during their more than 90-minute long one-on-one meeting at Chateau de Chantilly, one of the finest jewels of French cultural heritage, located about 50 kms north of Paris.

The one-on-one interaction was followed by the delegation-level talks.

In a joint press statement after the talks, President Macron said that Prime Minister Modi briefed him about the recent decision taken by India on Jammu and Kashmir and that it is in their sovereignty.

#WATCH: France President #EmmanuelMacron says, “PM @narendramodi told me everything about Kashmir & the situation in J&K. I said Pakistan & India will have to find a solution together & no third party should interfere or incite violence.” pic.twitter.com/Io1Vl2kDuA

“I told him that India and Pakistan will have to find a solution to the issue and no third party should interfere or incite violence in the region,” Macron said.

He said that peace should be maintained in the region and peoples’ rights should be protected.

“I will also speak to Pakistan Prime Minister after a few days and tell him that the talks should be held bilaterally,” the French president said.

He also said that France will deliver 1st of the 36 Rafale fighter jets to India next month.

Speaking after Macron, Prime Minister Modi said the relationship between India and France is not based on any selfishness, but on solid ideals of ‘Liberty, Equality and Fraternity’.

He said India and France will expand cooperation in counter terrorism and security.

“Both our countries are constantly facing terrorism. We thank President Macron for the valuable support that France has received in combating cross-border terrorism. We intend to broaden cooperation on security and counter-terrorism,” Modi added.

He said France and India stand firm together to meet the challenges of climate change, environment, and technology inclusive development.

“Together we can pave the way for a safe and prosperous world,” Modi said.

Ahead of the meeting, Macron explained the historic significance of the chateau to Modi and took him around the centuries-old building.

Earlier, Prime Minister Modi was accorded a red carpet welcome at the airport where he was received by Minister for Europe and Foreign Affairs Jean-Yves Le Drian.

“India and France enjoy extremely friendly ties and have been working together bilaterally and multilaterally for years,” Modi tweeted soon after his arrival.

Prime Minister Narendra Modi, who is currently on a three-nation tour, arrived in Paris for bilateral meetings with his French counterpart Edouard Philippe and French President Emmanuel Macron.