Home Home Slider ‘The lungs of the planet’ burning at a record rate; all you... 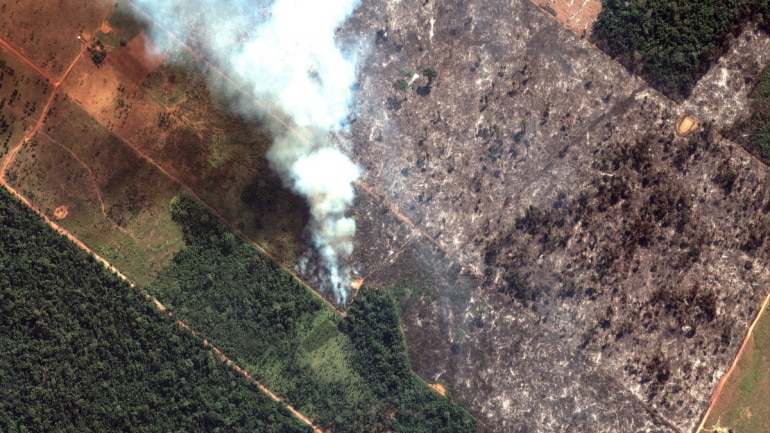 The massive fire at what is known as ‘the lungs of the planet’- Amazon rainforest is burning at a record rate which is even visible from the space. The Brazilian Amazon has experienced 74,155 fires since January, according to data from Brazil’s National Institute for Space Research, known by the acronym INPE.

Though the rainforest is typically wet and humid, the area’s driest months, with ‘activity’ peaking by early September and stopping by mid-November, according to NASA. The fires are largely linked to people clearing out the land for farming or ranching.

According to reports, satellite images show fires in the Brazilian states of Amazonas, Rondonia, Para and Mato Grosso. The state of Amazonas is most affected.

Effects of damage to the Amazon go far beyond Brazil and its neighbours. The area’s rainforest generates more than 20% of the world’s oxygen and 10% of the world’s known biodiversity. The Amazon is referred to as “the lungs of the planet” and plays a major role in regulating the climate. The world would drastically change if the rainforest were to disappear, impacting everything from farming to the water we drink.

Well, the fire is visible from the space. According to reports, the European Union Earth Observation Program’s Sentinel satellites captured images of ‘significant amounts of smoke’ over the Amazonas, Rondonia states and other areas.

Meanwhile, the skies darkened over San Paulo, Brazil, for an hour on Monday afternoon after winds carried smoke from about 1,700 miles away.

Correction: One of our alert NewsMobile readers pointed to a picture used in the story which was shared by Leonardo DiCaprio. We regret the error and we have changed the picture.