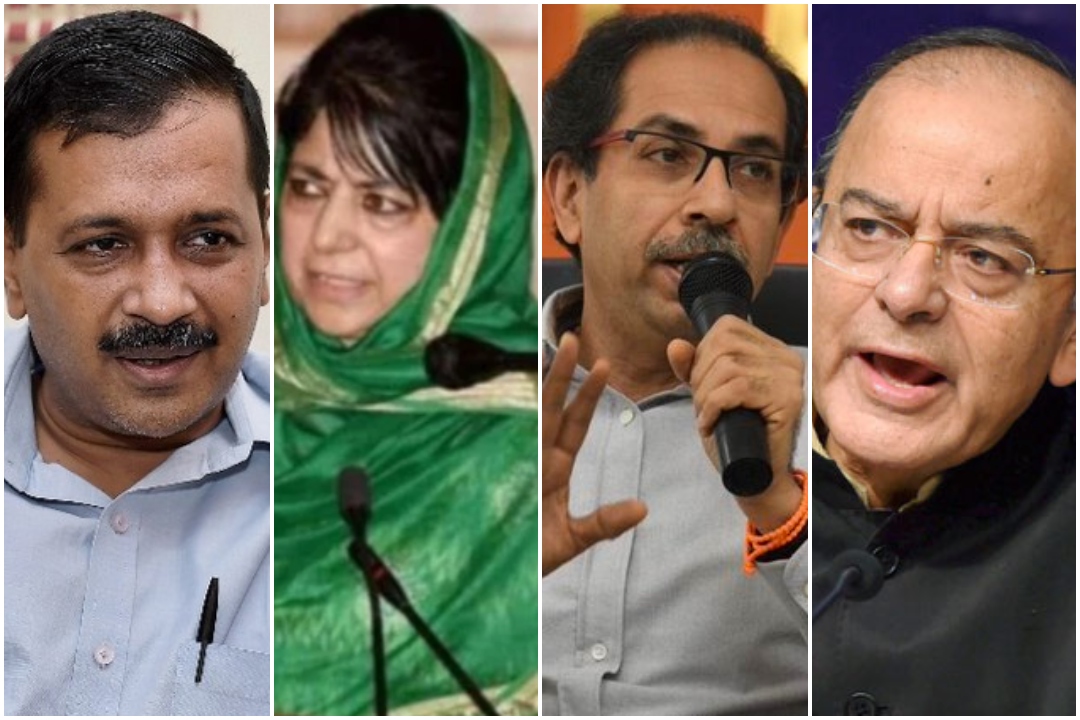 As soon as Union Home Minister Amit Shah announced the proposal in Rajya Sabha, opposition MPs were seen protesting in the upper house. A massive outburst was witnessed on social media as well. As the protests continued in Parliament, mixed reactions were observed on Twitter.

Here, this is how these politicians are reacting to the scrapping of Article 370;

Delhi Chief Minister and AAP leader Arvind Kejriwal on Monday supported the central government over its decision to scrap Article 370 of the Constitution of India.

We support the govt on its decisions on J & K. We hope this will bring peace and development in the state.

“We support the government on its decisions on J & K. We hope this will bring peace and development in the state,” Delhi Chief Minister and AAP leader tweeted.

People’s conference leader SG Lone says it is one of the darkest days his family has seen since 1957.

“It’s one of the darkest days I or my ancestors have seen since 1957. I can’t believe that one fine day you get up and find that you’ve been robbed of your special status. Now you’re a Union Territory. All powers have been taken away from you,” he said.

India is a full democracy.
Pakistan is a 100% terror state.

So the choice is easy.

Prime Minister Modi and Home Minister Amit Shah have earned a place in history. The clarity and determination which they have shown today proves ‘Modi hai toh Mumkin hai’. Congratulations to the entire nation.

Defence Minister Rajnath Singh also congratulated PM Modi and Home Minister Amit Shah “for amending the mistakes of the past and fulfilling the government’s commitment to remove discriminatory provisions which alienated the people of Jammu, Kashmir and Ladakh.”

Today is a great and historic day in the History of Independent India. By abrogating Article 370 our government has scripted a New History and accomplished the mission to seamlessly integrate the country into one entity. 1/2

BJP leader Sushma Swaraj thanked the MPS who voted to scrap special status to Jammu and Kashmir, provided under the provisions of Article 370 and Article 35 A. By passing the proposal, the MPs have given “true tribute to the sacrifices made by Dr Syama Prasad Mukherjee,” she said on Twitter. Sushma Swaraj also congratulated Amit Shah for “for his outstanding performance in Rajya Sabha”.

Kiren Rijiju lauds Modi government for making Ladakh a separate Union Territory. “Union Territory is a long-cherished dream of the people of Ladakh. The decision to remove Article 370 is a monumental step towards National integration, educational institutions and government jobs,” the Union minister said on social media.

I have nearly spent 50 years of my life serving our nation, but, no other day has been as special as today is.

Today we have finally been unified as one nation, with one constitution – thank you @narendramodi ji & @AmitShah ji for your decisive leadership. #Article370Revoked

General VK Singh, former Army chief and Union minister hails government’s decision. “I have nearly spent 50 years of my life serving our nation, but, no other day has been as special as today is. Today we have finally been unified as one nation, with one constitution – thank you @narendramodi ji & @AmitShah ji for your decisive leadership. #Article370Revoked,” Gen VK Singh tweeted.

Home Minister Amit Shah says that Article 370 & 35A have damaged J&K. He said, “It’s because of these sections that democracy was never fully implemented, corruption increased in the state, that no development could take place.

“We don’t believe in politics of religion, what votebank politics? Only Muslims live in Kashmir? What do you want to say? Muslims, Hindus, Sikhs, Jains, Buddhists all live there. If 370 is good it is good for all, if it is bad then it is bad for all,” he further said.

Congress leader Shashi Tharoor: “This is not the Indian democracy we have cherished for more than seven decades. The assurances that successive rulers of India including those of BJP have given people & leaders of Kashmir and the international community now stand torn into shreds.”

TMC MP Derek O’Brien said, “From 11 am this morning, we’ve been seeing procedural harakiri. We can’t see this anymore, the constitutional immorality.”

Samajwadi Party chief Akhilesh Yadav says that even as he welcomes that any attempts to strengthen the integrity of India, the process should be dictated by consensus, not threats. “Any move that seeks to strengthen the integrity of India is to be welcomed. But in a democracy decisions must be made by consensus, not by threat, force or fear. All parties should be part of talks and due process. Nothing should be unilateral for that only leads to more strife,” his post on social media said.

Finance Minister Nirmala Sitharaman said that India waits for this moment for 70 years.”Even our manifesto mentioned the need to abrogate Article 370, so it is not something we brought out suddenly like a rabbit from a magic hat,” she told the Upper House.

“This article kept Jammu and Kashmir away from India. J&K does not get the benefits the rest of the country does under this government,” Union minister Prakash Javadekar argued while claiming that Article 370 gave rise to terrorism. “J&K wants peace and progress, not terrorism,” he said.

“There is no amendment of Article 370. No requirement of the amendment. There was a presidential order earlier, there’s a new order now. It may have far-reaching political consequences but legally it’s fine.

“Amendment in Article 367 is for the purpose of the application. It’s for purposive interpretation.”