In an unfortunate event, two persons, including a 20-year-old Delhi University (DU) student, were killed and three others injured when the car that they were seated in, crashed into a divider on Ring Road in east Delhi’s Vivek Vihar. According to the police, the incident happened early morning on Sunday and the car was at a speed higher than that allowed. 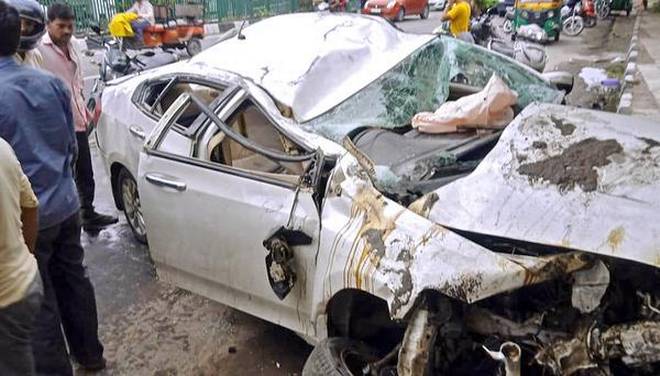 The police also said that apart from the driver, no other occupant was wearing a seat belt. This was also one of the reasons that the other occupants were thrown out of the car post the crash impact and the driver, because of the belt, remained in the car and suffered minor injuries.

Deputy commissioner of police (Shahdara) Meghna Yadav said that the car’s driver, who was injured in the crash, is currently in police custody. They were waiting for the alcohol test results to come to ascertain if the driver was driving under the influence of alcohol or not.

“The man, who was driving the car, was medically examined to ascertain if he was drunk. The report is awaited. Action would be taken as per law if his medical report confirms alcohol intake. A case of rash driving and death by negligence under sections 279 and 304 A of Indian Penal Code was registered at the Vivek Vihar police station,” said the deputy commissioner of police.

The exact location of the accident was on the stretch between Anand Vihar railway station and Dishad Garden, just 100 metres before the Dilshad Garden underpass.

According to reports, the white Honda City, climbed on to the road divider, uprooted an electric pole and the divider’s iron railings before it came back on the road and hit a pavement around 50metres ahead where it finally overturned.
All the occupants were rushed to Guru Teg Bahadur Hospital, where two of them were declared dead on arrival.

Those killed were identified by the police as 18-year-old Prabhjot Singh from north Delhi’s Malkaganj and 20-year-old Rubel, a third-year student of DU’s Daulat Ram College. The injured were identified as 19-year-old Arshpreet Kaur, also a DU student and 21-year-old Keshav. The driver of the car, 23-year-old Lakshya Malhotra, was discharged from the hospital, and is currently in police custody.

As per reports from a staff of a nearby petrol pump, located opposite the accident spot, the car appeared to be travelling at a speed exceeding 100km per hour before the crash.

“The impact of the crash was so powerful that all the doors of the car were thrown open and except the driver, all the four occupants were flung outside. The woman who died landed on the road opposite the accident spot. Two men were lying near the road’s divider. Another woman was lying injured near the pavement where the car had overturned,” said the staff member of the petrol pump, who has asked for concealing his identity.

As per unconfirmed reports, some alcohol bottles and packets of cigarette were found at the spot.
DCP Yadav, however, said that the police did not find any alcohol in the car.

According to police officials, the two women were friends and originally from Sirsa district in Haryana. Rubel lived in a paying guest accommodation in Mukherjee Nagar and Kaur stayed in a flat in Dilshad Garden, where the five had gathered to celebrate her birthday on Saturday night.