Home NM FACT CHECKER FACT CHECK: Video of mob vandalising a bus is being shared with...

A video has surfaced on the internet in which a mob can be seen vandalising a bus and according to the claim attached to it, the video is from Mumbai.

The caption with the video read: “Oppose of bus route started to Bandra to BKC by group of Muslim Rikshawala’s running share Riksha on that route.” 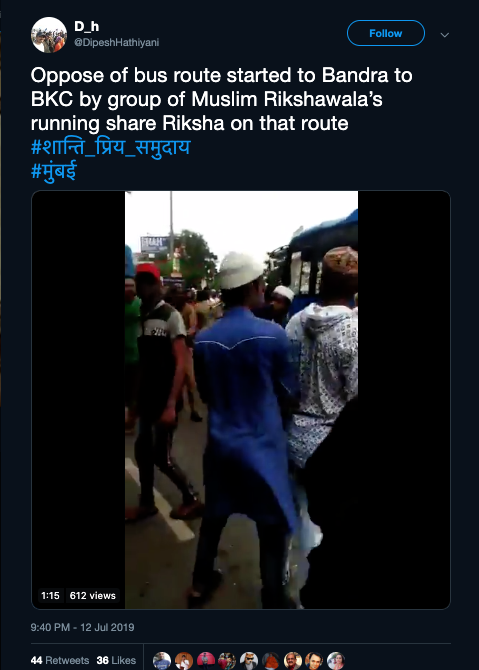 Oppose of bus route started to Bandra to BKC by group of Muslim Rikshawala’s running share Riksha on that route#शान्ति_प्रिय_समुदाय#मुंबई pic.twitter.com/2QtflS4aY4

When the team of fact-checkers at NewsMobile checked the above video, we found that the claim attached with the video is false.

The video is originally from Gujarat’s Surat when a clash broke out with police during a silent protest against mob lynching.

On putting the keyframes of the video through Reverse Image Search, we came across a video by ABP Asmita which featured a video from the same incident.

#WATCH Surat: 4-5 policemen injured after a clash broke out when police tried to stop people from taking out rally in Nanpura area, today. Section 144 (prohibits assembly of more than 4 people in an area) has been imposed in the area. The rally didn’t have permission. #Gujarat pic.twitter.com/UPnu643Cjo

Hence, the above information proves that the video has been shared with the FAKE clam.