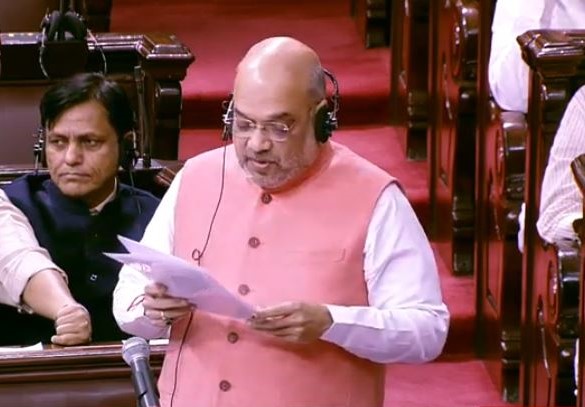 Clarifying the Centre’s decision to extend President’s Rule in J&K, Union Home Minister Amit Shah on Monday said the government has no other option but to extend the rule, as the Election Commission wants to hold Assembly elections in the state by the end of 2019.

His remarks came in Rajya Sabha after he moved a statutory resolution to extend President’s Rule for another six months, starting July 3.

Home Minister Amit Shah in Rajya Sabha: I have brought the proposal to extend by 6 months the President’s rule in Jammu & Kashmir which is ending tomorrow pic.twitter.com/DFxHziIBxt

He also moved the Jammu and Kashmir Reservation (Amendment) Bill that proposes to provide reservation to people living in the areas along the border with Pakistan on par with residents of areas near the Line of Actual Control.

“The Election Commission after consultations with Jammu and Kashmir administration and all the political parties decided to hold Assembly polls by the end of this year. The Election Commission took this decision in view of religious events like Ramzan and Amarnath Yatra and the prevailing security situation,” Shah said.

On the Reservation Bill, the Home Minister said it will benefit 3.50 lakh people residing in border areas of Jammu and Kashmir.

“A total of 433 villages in the state including 70 in Kathua, 133 in Samba and 232 in Jammu will be the beneficiaries of the Bill,” he said. Both the Bills have already been passed by voice vote in Lok Sabha.