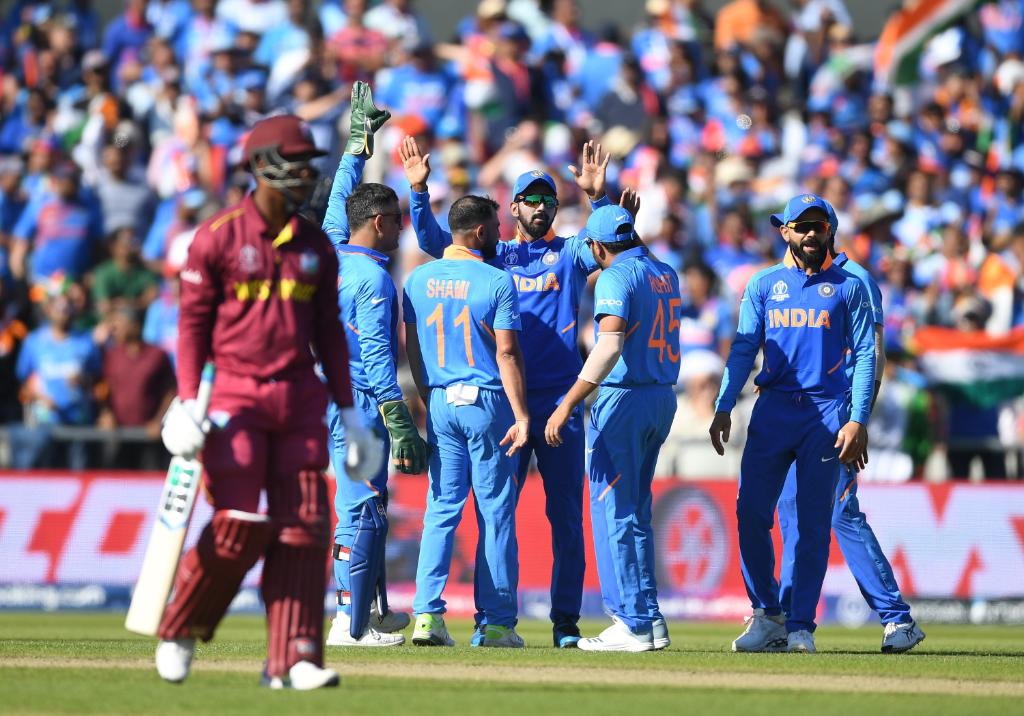 India managed to keep their unbeaten streak alive in the ICC Men’s Cricket World Cup as they vanquished West Indies by 125 runs at Old Trafford Cricket Ground here on Thursday.

Interestingly, India is now the only unbeaten team in this edition of the premier tournament. On the other hand, West Indies are out of the semi-final contention.

Chasing a target of 269 runs, West Indies had a poor start as opener Chris Gayle got out early, in the fifth over, after scoring just six runs. Mohammed Shami provided India with their first breakthrough.

In his next over, Shami struck again as he got hold of Shai Hope (5). Opener Sunil Ambris was then joined by Nicholas Pooran and both played steadily.

After losing two quick wickets, the on-field batsmen tried their best to shrug off the pressure put by Indian bowlers. Both kept the scoreboard running and formed a 55-run partnership. However, despite playing with caution, Ambris (31) was LBW in the 18th over, bowled by Hardik Pandya.

Soon after Ambris’ dismissal, Pooran too was sent back to the pavilion by spinner Kuldeep Yadav which halted his 28-run inning. Shimron Hetmyer and Jason Holder (6) then took the field but their partnership also did not last long as the latter lost his wicket to Yuzvendra Chahal.

With this, half of the West Indies batting line-up was sent back to the pavilion when they had just 98 runs on the board after 24 overs.

Carlos Brathwaite then came out to bat along with Hetmyer. In the 27th over, Jasprit Bumrah came out furiously as he took two wickets, Brathwaite (1) and Fabian Allen (0), on the first two deliveries of the over. After taking wickets, Bumrah continued to bowl a maiden over.

Hetmyer was then accompanied by Kemar Roach on the field. However, fall of wicket did not stop as, in the 29th over, Hetmyer (18) too got out as he became a victim of Shami.

Sheldon Cottrell then took the charge and played fearlessly as he hammered a boundary and a massive six to Yuzvendra Chahal in the 30th over. However, Chahal made a scintillating comeback as he got hold of Cottrell (10) in the same over.

Oshane Thomas then came out to bat and joined on-field batter, Roach (14*). West Indies had just one wicket in hand and needed 145 runs from 20 overs. Shami bowled the 35th over and sent Thomas back to the pavilion and handed India a massive 125-run victory.

Earlier, after opting to bat first, India lost its opener Rohit Sharma (18) pretty early in the innings. He was dismissed by Kemar Roach in the sixth over.

The right-hander looked to have missed the ball but wicket-keeper Shai Hope appealed for caught-behind, on-field umpire adjudged it not out but West Indies decided to review it. There was confusion whether the ball hit the pad or the bat. The snick-o-meter indicated there was a clear spike, so the third umpire decided to overturn the decision and rule him out.

Skipper Virat Kohli came out to bat next, and along with KL Rahul steadied the innings for Men in Blue as the duo stitched together a partnership of 69 runs, but as soon as India started to gain an upper hand in the match, Rahul (48) was sent back to the pavilion by Jason Holder in the 21st over, reducing India to 98/2.

Vijay Shankar (14) and Kedar Jadhav (7) failed to impress with the bat as both the batsmen were dismissed pretty early in their innings. Their dismissals left India in a spot of bother. MS Dhoni joined Kohli in the middle and the duo played cautiously to move the scoreboard along. Kohli brought up his half-century, recording his fourth consecutive fifty-plus score in the ongoing World Cup.

Kohli and Dhoni put up a 40-run stand but India were given a big blow in the 39th over as Kohli (72) was finally dismissed by Holder, reducing India to 180/5. Hardik Pandya joined Dhoni in the middle and they looked to play with some restraint initially but after the 42nd over, Pandya decided to change gears and play some attacking shots.

In the final five overs, both Pandya and Dhoni went after the Windies bowlers and the duo stitched together a partnership of 70 runs. Pandya (46) was sent back to the pavilion by Sheldon Cottrell in the penultimate over. But Dhoni ensured the team goes past the 260-run mark.

Dhoni remained unbeaten on 56. Kohli was the top-scorer for India as he played a knock of 72 runs whereas Roach was the highest wicket-taker for Windies as he scalped three wickets.

India will now compete against England on June 30 while West Indies will face Sri Lanka on July 1.