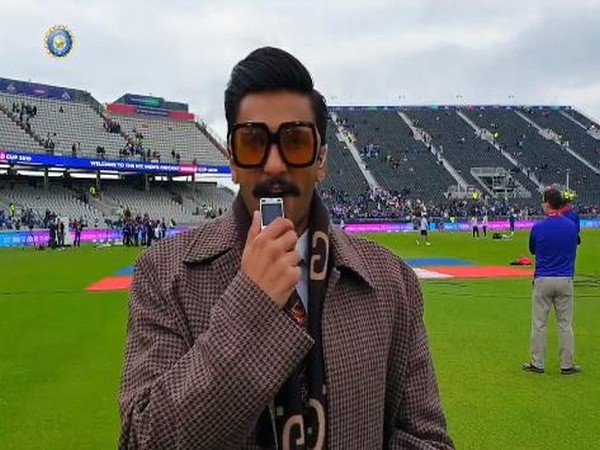 Ranveer Singh, who will be seen essaying the role of legendary cricketer Kapil Dev in his forthcoming film ’83,’ is proving his love for cricket.

The actor took the mic in his hands and commented on the ‘biggest’ clash in World Cup cricket — India vs Pakistan — from the ground of Old Trafford on Sunday.

It is always a win-win situation when cricket meets Bollywood, and Ranveer has left no stone unturned to raise the bar of the much-awaited clash!

Seen at Old Trafford, the actor sent his fans into a frenzy as he turned into a voguish commentator.

“Ladies and gentlemen, boys and girls, welcome to cricket’s biggest stage. The World Cup and the biggest cricket match — India vs Pakistan, doesn’t get bigger than this!” he started.

Look who gave a low down of the BIG CLASH between India & Pakistan LIVE from Old Trafford before the start of the game – @RanveerOfficial himself #TeamIndia #INDvPAK #CWC19 🇮🇳💙😎👌 pic.twitter.com/NaNKOY5YEw

An overwhelmed Ranveer spoke about the weather conditions and said, “We’re here in Manchester, the weather’s looking alright. The weather is looking promising. It’s not looking too bleak. It looks like, we might just have the humdinger of the game that we’re all here for.”

Matching the spirit of a true commentator, Ranveer continued, “Ladies and gentlemen, I can assure you, the atmosphere here is absolutely electric, fans are streaming in, the players have come out to warm up and it’s gonna get crazy in not very long from now.”

“It’s going to be an amazing match; let’s hope for some amazing cricket, I am sure we’re gonna get some crowd-pleasing moments and an unforgettable match in Manchester, here’s Ranveer Singh until next time!” Ranveer signed off.

Not only, he made an on-point commentary, the actor also engaged with the ‘Men in Blue’ prior to the match.

Ranveer was seen sharing a burst of laughter with injured batsman Shikhar Dhawan. To cheer up the swashbuckling left-hander, Ranveer was seen entertaining the India opening batsman.

Pakistan, who won the toss asked India to bat first in the much-awaited World Cup clash at Old Trafford on Sunday.

Meanwhile, Ranveer is prepping for his upcoming film based on Kapil Dev who lifted the World Cup in 1983.

Kabir Khan’s directorial ’83’ is slated to hit the theatres next year on April 10.