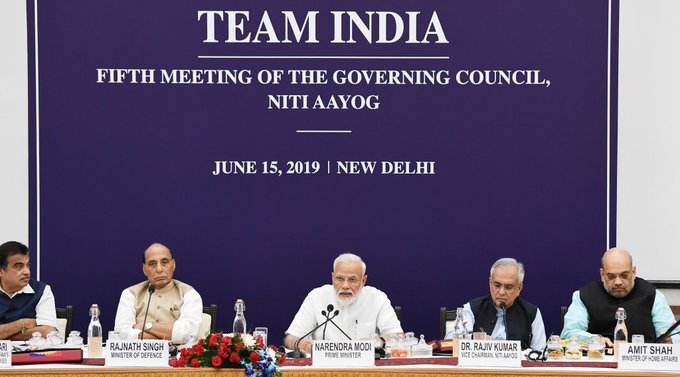 In his first meeting with Chief Ministers after re-election, Prime Minister Narendra Modi on Saturday called for a collective fight against poverty, unemployment, corruption and violence and for urgent steps to tackle drought and drinking water crisis in the country.

“Empowerment and ease of living have to be provided to each and every Indian,” he said while addressing the fifth meeting of governing council of NITI Aayog.

The agenda at the Fifth Governing Council Meeting of #NITIAayog will focus on reforms for ‘Transforming Agriculture’, with special emphasis on Agriculture Produce Marketing Committee (APMC) Act and Essential Commodities Act, 1955. #FifthGCM pic.twitter.com/fmRZ0BIBsW

-Modi said the goal of making India a five trillion dollar economy by 2024 is challenging but achievable. The states should recognise their core competence and work towards raising GDP targets right from the district level.

-“Both the Centre and states should work towards growth in exports in order to raise per capita incomes. A thurst on export promotion at the state level will provide a boost to both income and employment,” said the Prime Minister.

-Describing water as an important element for life, Modi said the poor bear the brunt of insufficient water conservation efforts. He called for effective steps to tackle drought and said that the spirit of per-drop, more-crop needs to be promoted.

-Reiterating the government’s commitment to double incomes of farmers by 2022, Modi said this requires focus on fisheries, animal husbandry, horticulture, fruits and vegetables.

-There is a need for structural reform in agriculture which require corporate investments, robust logistics and ample market support. He said the food processing sector should grow at a faster pace than foodgrain production.

-Modi said the country is moving towards a governance system characterised by performance, transparency and delivery for which proper implementation of schemes and decisions is vital. He called upon all members of the governing council of NITI Aayog to help create a government setup which works, and has the trust of the people.

West Bengal Chief Minister Mamata Banerjee and her counterparts from Telangana K. Chandrashekhar Rao and Punjab’s Capt Amarinder Singh are not attending the first meeting of the Niti Aayog governing council, chaired by Prime Minister Narendra Modi. Banerjee and Rao had also skipped the Modi`s swearing-ceremony on May 30.