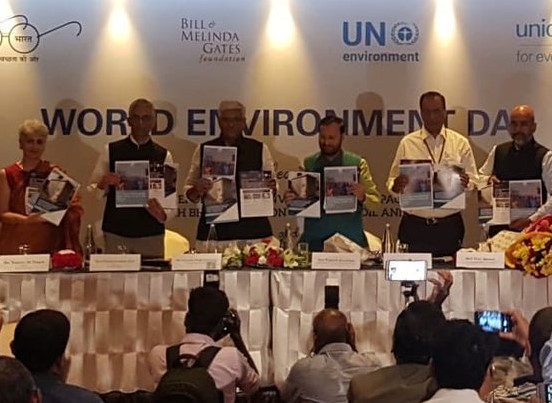 The ‘Swachh Bharat’ (Clean India) initiative of the Narendra Modi government has led to a reduction in the contamination of groundwater in many villages, a UNICEF study has observed.

The UNICEF study, based on ground reports from three states – Bihar, Odisha and West Bengal – said that groundwater samples suggested that villages not free of open defecation were 11.25 times more likely to have their groundwater sources contaminated with faecal matters as compared to open defecation free villages.

“According to our study, it was found that the relative risk of faecal contamination of soil was 1.13 times more likely in non-ODF villages as compared to #ODF villages” – Mr. Nicolas Osbert, Chief, WASH, @UNICEFIndia pic.twitter.com/fHxaDjfDfS

The report released on World Environment Day (June 5) and representatives of its institutions lauded the political will of the government for pursuing this scheme.

Yasmin Ali Haque, the UNICEF representative in India, said that children are acting as key agents of change. “Now 96.5% toilets are being used regularly. We have seen children are eager to change things. The Swachh Bharat Mission has to be continued and sustained.”

.@DrYasminAHaque, representative of @UNICEFIndia stated why it is important to create a safer environment for the children, the future change agents of our nation. She laid special focus on safe #sanitation practices like handwashing for a cleaner and safer future. pic.twitter.com/IxjwKzu6CK

Environment minister Prakash Javadekar claimed Swachh Bharat Mission has become a people’s movement. “People made whistle gangs to taunt anyone who would sit in the field. Thousands of women started using toilets. Earlier toilets were made, but not used. We will go forward to provide more toilets as poor people want to aspire,” he said.

Among the three states, Bihar is the worst in terms of food and drinking water contamination in its non-ODF villages. The study says in such villages of Bihar, 66.7% of food sources are contaminated with faecal matters. The corresponding figures for Odisha and Bengal are 57.1% and 47.1%, respectively. But in ODF villages of Bihar and Bengal, there is zero possibility of food sources being