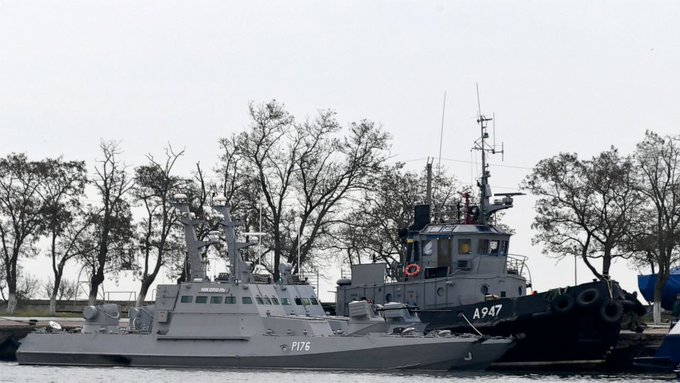 A United Nations tribunal on Saturday ordered Russia to immediately release three Ukrainian naval ships and two dozen sailors, who were captured during a confrontation off the Crimean Peninsula last November.

The Germany-based International Tribunal for the Law of the Sea (ITLOS) issued the order after a hearing, earlier this month, which was not attended by Russia, Voice of America reported.

The Russian navy captured the Ukrainian sailors and their vessels in the Kerch Strait, which links the Black and Azov seas, on November 25, 2018, after opening fire on them.

It was the first open military clash between Russia and Ukraine since Moscow’s 2014 annexation of the Crimean Peninsula, which has been internationally condemned as an illegal action.

Ukraine stresses that Russia stopped its ships in the Black Sea as they were returning to the Ukrainian port city of Odessa. The country argues that its ships were immune to such seizures under the Law of the Sea.

Meanwhile, Russia says that the vessels were trying to enter the Azov Sea through the Kerch Strait in defiance of Russian orders to stop because it had temporarily closed the waterway.

Moscow, since then, has charged the crew with violating its border and argues the tribunal does not have jurisdiction over the issue because of an exemption for military activity.

“The Tribunal notes that any action affecting the immunity of warships is capable of causing serious harm to the dignity and sovereignty of a state and has the potential to undermine its national security,” Al Jazeera quoted Jin-Hyun Paik, the President of ITLOS, as saying.

“The tribunal considers it appropriate to order both parties to refrain from taking any action which might aggravate or extend the dispute,” he added.

However, the tribunal “does not consider it necessary to require [Russia] to suspend criminal proceedings against the 24 detained Ukrainian servicemen and refrain from initiating new proceedings,” Paik said.

Kiev had called for an end to the legal proceedings in which sailors may face up to six years in prison if found guilty.