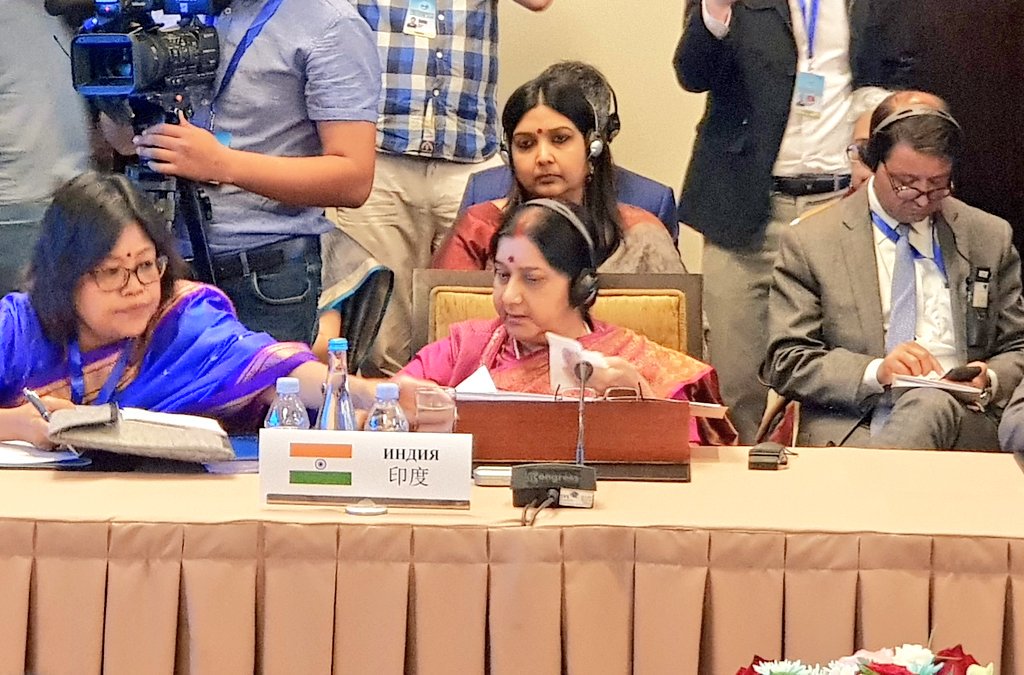 “We’ve also operationalized air freight corridors between Kabul & Kandahar & New Delhi and Mumbai in 2017. We welcome regional connectivity initiatives, that are inclusive, sustainable, transparent and respect the principles of sovereignty and territorial integrity”, she added.

Citing the dastardly Pulwama attack which killed 44 CRPF soldiers, the responsibility of which was claimed by Pakistan-based terror outfit Jaish-e-Mohammed (JeM), she expressed her wishes for the victims of Sri Lanka bombings.

“Our heart goes out to our brothers and sisters of Sri Lanka, who have recently witnessed the ghastly act of terrorism. Our wounds of Pulwama attack were still raw and news from neighborhood has made us more determined to fight firmly resolutely against this menace.”, she said.

An important partner in Central Asia

EAM @SushmaSwaraj called on Kyrgyz President Jeenbekov ahead of #SCO Foreign Minister’s Meeting in #Bishkek. Visible enthusiasm to expand bilateral relations across all sectors, as both countries commit to explore the untapped potential. pic.twitter.com/hRm1RhzQ5L

The two-day Council of Foreign Ministers (CFM) meeting, from May 21 to May 22, will see all sides exchange views on issues of international and regional importance, along with reviewing the preparation for the SCO Summit in Bishkek from June 13-14, according to the MEA.

The SCO was founded at a summit in Shanghai in 2001 by the then-Presidents of Russia, China, Kyrgyz Republic, Kazakhstan, Tajikistan and Uzbekistan.