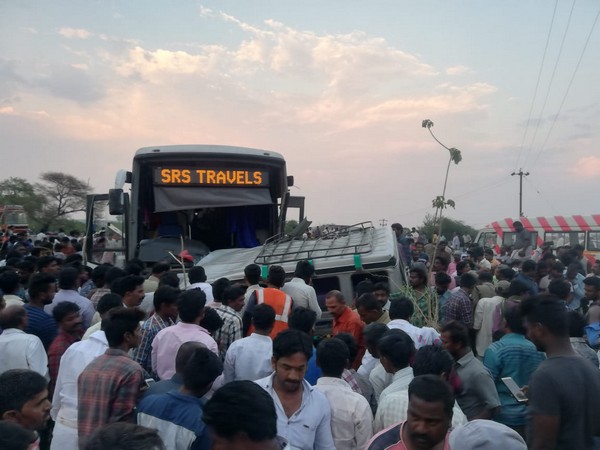 As many as 13 people died on the spot and many others got injured when a bus trying to overtake a two-wheeler, lost its control and hit a tempo traveller in Veldhurthy on Saturday.

“A private bus, on way to Bengaluru, tried to overtake a two-wheeler and lost its control. It rammed into the divider and hit a tempo traveller coming from the opposite direction,” said Fakirappa, Superintendent of Police (SP), Kurnool.

“The people travelling on the bus belonged to Jogulamba Gadwal district of Telangana and injured people have been admitted in Kurnool district hospital.”

Prime Minister Narendra Modi expressed his condolence to the families of the deceased and hoped for quick recovery of the injured.

“The road accident in Andhra Pradesh’s Kurnool is deeply unfortunate. My thoughts are with the bereaved families. I hope the injured recover quickly,” said PM Modi in a statement.

Telangana Chief Minister K Chandrasekhar Rao also expressed his grief over the incident and ordered the Collector of Jogulamba Gadwal to extend all possible help to the injured people.