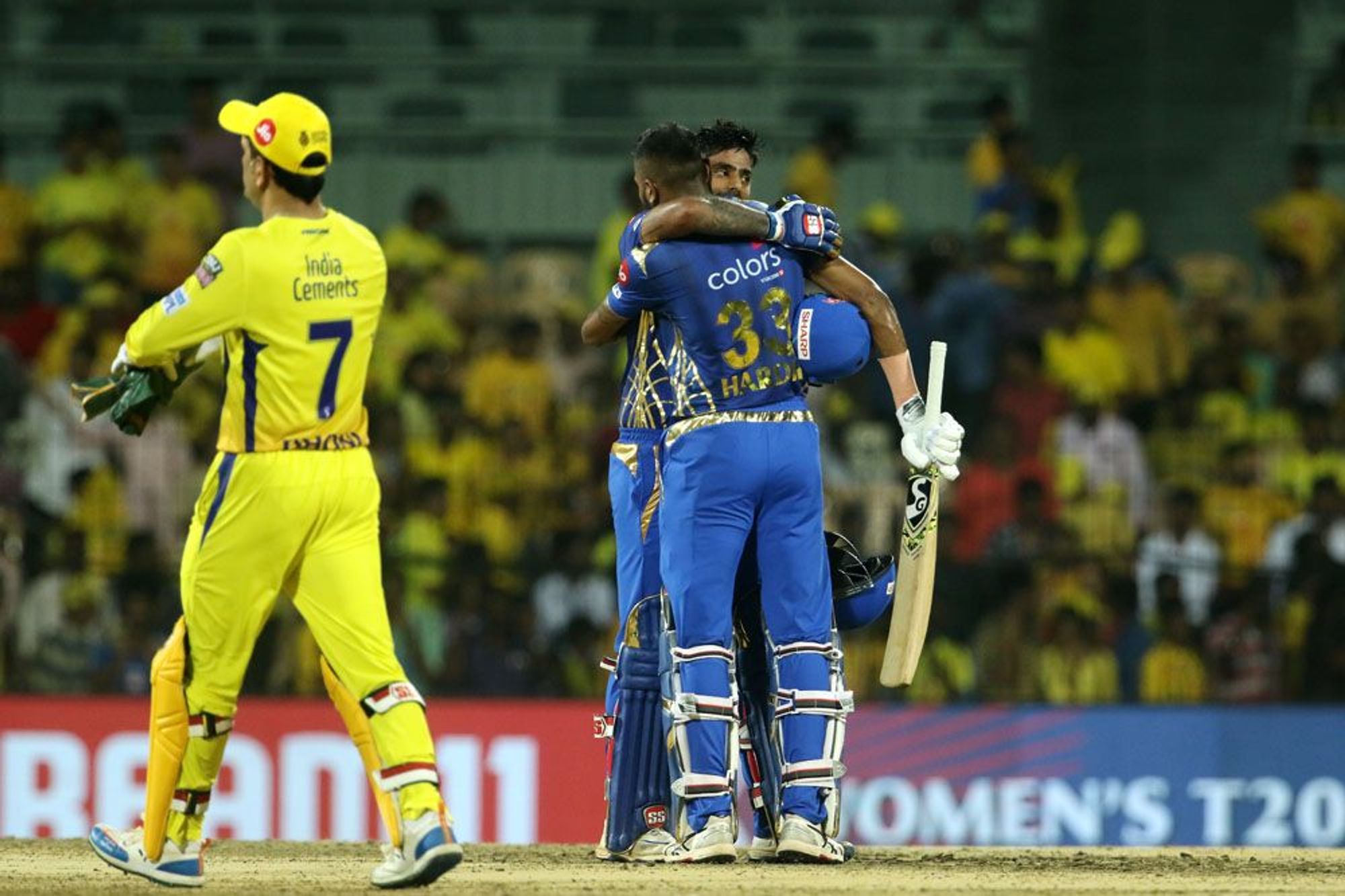 In the clash of the Titans, it was Mumbai Indians who booked a berth in the final of IPL 2019 Final after they defeated the Chennai Super Kings in Qualifier 1 on Tuesday at the MA Chidambaram Stadium in Chennai.

The visitors restricted the home team to 131 for 4 first and then chased down the runs in 18.3 overs; the 6-wicket win was MI’s third consecutive win over CSK this season. Rahul Chahar was MI’s best-performer with the ball, while Suryakumar Yadav powered the chase with an unbeaten half-century.

The Mumbai Indians lost captain Rohit Sharma in the very first over of the chase, while the other opener Quinton de Kock made 8 before he was dismissed in the fourth over. But Suryakumar Yadav, who batted at number three, and Ishan Kishan, who came in at the fall of the second wicket, stitched together an 80-run partnership that swung the match in MI’s favour.

Kishan was dismissed in the fourteenth over, but Yadav stayed to the end and completed the job; he finished unbeaten on 71.

For the Super Kings, the onus was on the spinners to cause the bulk of the damage, but Harbhajan Singh, Ravindra Jadeja and Imran Tahir could only pick up four wickets.

Earlier in the evening, the Super Kings lost their top-order cheaply yet again; Faf du Plessis made 6, Shane Watson made 10 and Suresh Raina made 5 – the latter two were dismissed playing strokes which could have been avoided. Murali Vijay (26) and Ambati Rayudu resurrected the innings with a 33-run partnership. After Vijay was dismissed, Rayudu combined with captain MS Dhoni in an unbeaten 66-run partnership that took CSK to 131. Rayudu, who had initially scored at a rate well under run-a-ball, brought urgency into his game in the company of his captain; he finished unbeaten on 42 from 37 balls. Dhoni struck three sixes – two of them off Lasith Malinga in the 19th over – in his unbeaten 37 from 29 balls.

For the visitors, young Rahul Chahar returned figures of 4-0-14-2, while Krunal Pandya supported him well, finishing figures of 1-21. Jayant Yadav picked up the one other wicket. The three pace bowlers used ended with combined figures of 9-0-70-0.

On Wednesday, Delhi Capitals and Sunrisers Hyderabad will lock horns in the eliminator to clash with Chennai in the second Qualifier.