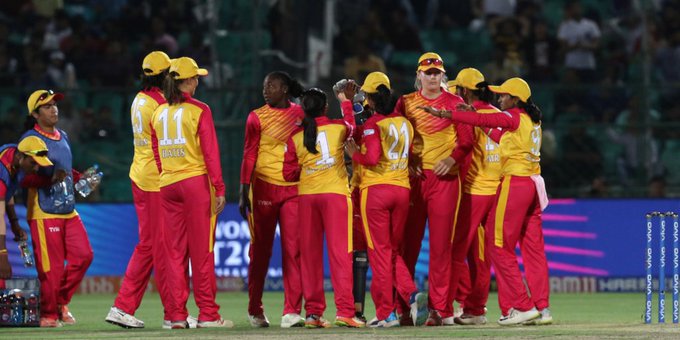 Trailblazers defeated the defending champions Supernovas by two runs in the opening Women’s T20 Challenge at the Sawai Mansingh Stadium on Monday.

Supernovas captain Harmanpreet Kaur, who played her first game on home soil this year as an ankle injury had ruled her out of the series against England, anchored the innings for her team but couldn’t pull off the 141 run-chase.

With 21 runs required from 12 balls, Sophie Ecclestone didn’t leak runs in the penultimate over and got Sophie Devine (32) leg before to change the game. In the final over, Harmanpreet punished spearhead Jhulan Goswami with four boundaries but having required three off the last ball, Harmanpreet missed both the ball and victory.

ALSO READ: These two teams have been the toughest for Man City boss Pep Guardiola

Supernovas started well with Jemimah Rodrigues and Chamari Atapattu keeping the run-rate high. However, a direct hit by Shakera Selman dismissed Rodrigues, who was short by a mile despite great dive. Soon after, big-hitter Natalie Sciver (1) was smartly caught by her compatriot Ecclestone at square leg, which brought in Devine to take charge with Harmanpreet.

Earlier, captain Smriti Mandhana’s 90 off 67 balls guided Trailblazers to post 140/4 after put in to bat. A handy left-right combination of Mandhana and Suzie Bates opened the innings, which short-lived. Off-spinner Anuja Patil delivered a wicket-maiden over, sending Bates (1) back. The Kiwi batswoman top-edged for a sitter on the off side where the ball bounced off Rodrigues’ thighs but she got her hands under it just in time.

Supernovas bowlers dominated Trailblazers, denying them to find a boundary. Mandhana and Harleen Deol tested and adapted to the wicket and slowly started to build a partnership. Mandhana, who wasn’t timing the ball well, opened her arms as Supernovas changed pace and delivered poorly. The Trailblazers captain dispatched the first six of the match, completing 100-run mark for the team.

Sophie Devine got hold off Trailblazers and ended the 119-run stand. Deol played straight to long on but the ball went to Radha Yadav, who made no mistake to end Deol’s outing for 36. In the final over, Mandhana followed Deol to the dugout as she gave the ball in the safe hands of Atapattu off Radha. The over also saw the dismissal of Deepti Sharma for a golden duck and run out of Stafanie Taylor.

Trailblazers will next meet Mithali Raj-led Velocity on May 8 at the same venue.