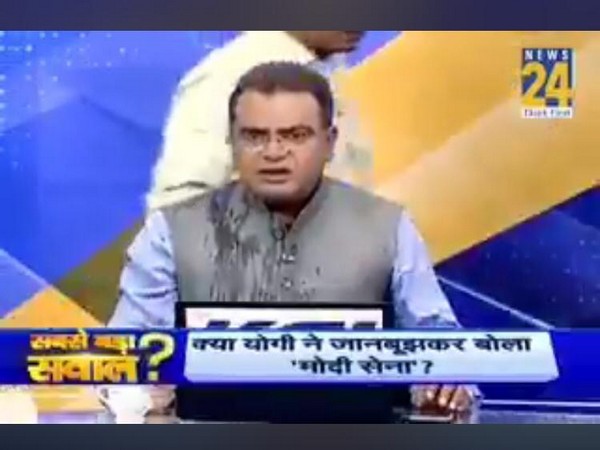 Poll season debates rage with political opponents reigning fire and fury with rivals with whom they trade choicest insults and engage in verbal duels. These can, at times, be hitting below the belt.

However, a political debate on a national TV channel touched a new low when one of the panelists, in a fit of anger, threw a glass of water at his opponent.

The arc light was on, camera was rolling, the debate was live. Just then Congress spokesperson Alok Sharma lost his cool and assaulted the BJP spokesperson by hurling a glass of water on him.

The incident took place on News24’s TV debate, the channel’s journalist Manak Gupta said posting a video of the incident on his twitter handle.

The video shows Sharma throwing the glass on his BJP counterpart after the latter called him a “traitor” even as other panelists remained unfazed by the incident. However, the anchor of the show, Sandeep Choudhary, had water splashed on his jacket.

The anchor also admonished the BJP spokesperson for using incendiary language that resulted in the unfortunate incident in the TV studio.

After the incident, Sharma was asked by the anchor to apologise but Sharma didn’t budge and asked for an apology for being called a traitor.

This isn’t the first time when political spokespersons engage in misbehaviour on the national media. Other instances have also taken place where political leaders have engaged in a verbal spat or physical fight.