Senior Congress leader P Sudhakar Reddy on Sunday resigned from the party accusing the Congress party of demanding crores of rupees for allocation of party tickets.

In a letter to Congress president Rahul Gandhi, Reddy, who was former AICC secretary expressed disappointment over the functioning of the party and said that the “traditions and values of the Congress have changed contrary to its principle”, news agency ANI reported. 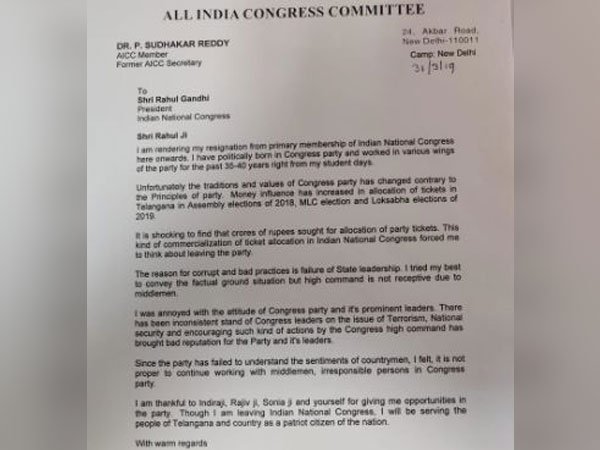 He also alleged that money influence was increased in the allocation of tickets in Telangana in 2018 Assembly elections, MLC elections and Lok Sabha elections of 2019.

“It is shocking to find that crore of rupees sought for allocation of party tickets. This kind of commercialisation of ticket allocation in Indian National Congress forced me to think about leaving the party,” he claimed while alleging that the reason for corrupt and bad practices is the failure of State leadership.

Reddy further claimed that he had tried to bring the matter to the notice of party leadership but failed in the attempts.

“I tried my best to convey the factual ground situation but high command is not receptive due to middlemen. I was annoyed with the attitude of the Congress party and its prominent leaders. There has been an inconsistent stand of Congress leaders on the issue of terrorism, national security and encouraging such kind of actions by the Congress high command has brought a bad reputation for the party and its leaders,” he added in the resignation letter.

“Since the party has failed to understand the sentiments of countrymen, I felt, it is not proper to continue working with middlemen, irresponsible persons in Congress party,” the letter read.