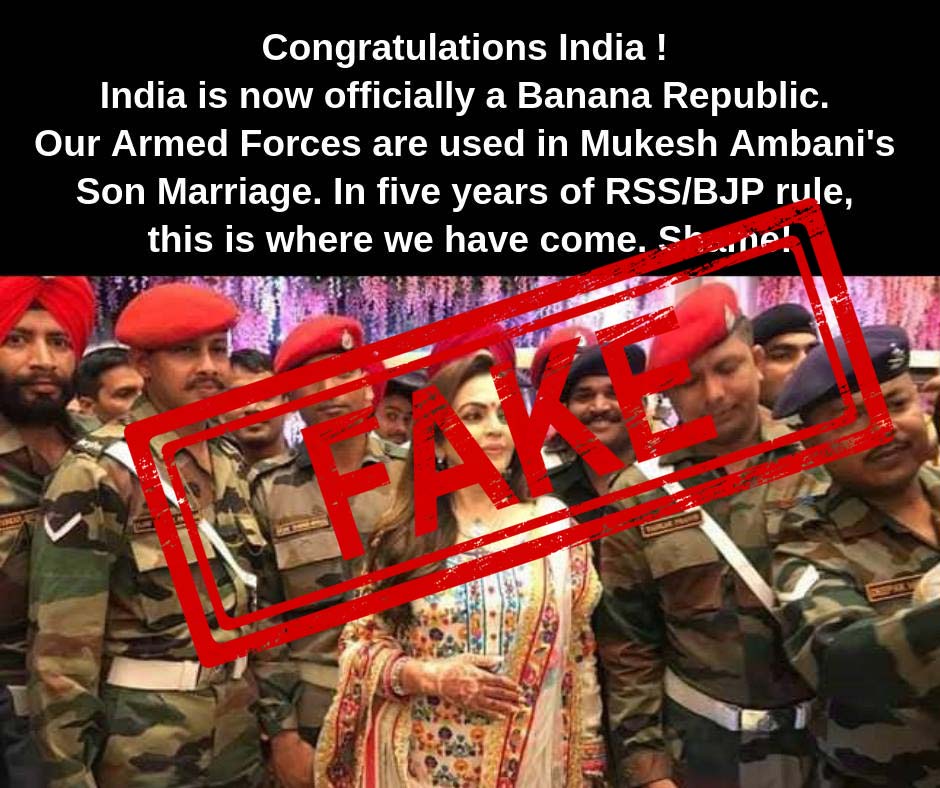 Days after the celebrity wedding of Indian business tycoon Mukesh and Nita Ambani’s son Akash Ambani’s wedding with Shloka Mehta, a picture is making rounds on social media which claims that armed forces were used for security in the much talked about the wedding ceremony.

The text on the picture read: “Congratulation India! India is now officially a Banana Republic. Our Armed Forces are used in Mukesh Ambani’s Son Marriage. In five years of RSS/BJP rule, this is where we have come. Shame!”

When we put the image through Reverse Image Search, we found that Nita Ambani’s picture with army soldiers is from the time when the Ambani family organised a special musical fountain show on March 12th, especially for the armed forces to seek blessings for the newlywed couple.

The picture was originally shared by senior reliance official and former journalist Rohit Bansal on his verified Twitter handle on the morning of March 13th.

Smt Nita Ambani with armed forces jawans at the Musical Fountain show Dhirubhai Ambani Square on March 12. Organised for members of the armed forces, police and their families as a mark of respect and to seek blessings for the wedding of Sh Akash Ambani and Ms Shloka Mehta. pic.twitter.com/M5LdWhUW4y

Our fact-checking team also confirmed this.

This debunks the fake news that armed forces were used during Akash Ambani, Shloka Mehta’s wedding.