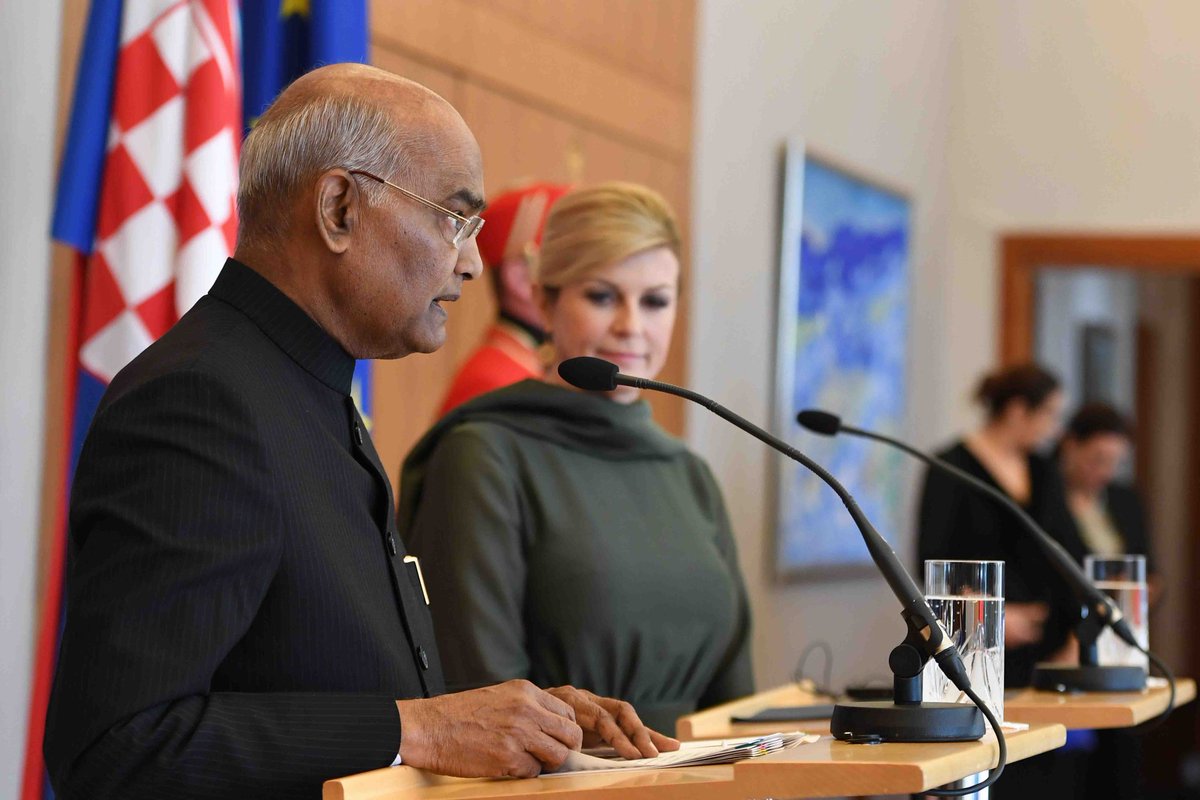 To celebrate Mahatma Gandhi’s 150th birth anniversary, India has offered a sculpture of the father of the nation to Croatia during President Ram Nath Kovind’s official visit.

“This year marks the 150th birth anniversary of Mahatma Gandhi, the father of our nation and a global icon of peace and non-violence. To mark this special occasion in Croatia, we have offered a bust of Mahatma Gandhi to the Government of Croatia for public display,” Kovind said during a joint presser with his Croatian counterpart Kolinda Grabar-Kitarovic on Tuesday.

Along with exchanging Memoranda of Understanding (MoU), Kovind was also bestowed with Croatia’s highest civilian honour, the Grand Order of the King of Tomislav, during the President of India’s first ever visit to the Balkan country.

MoUs were exchanged between India and Croatia in the field of tourism amongst other things. The Indian Council for Cultural Relations (ICCR) chair for Sanskrit and Hindi language was also established with the University of Zagreb through MoUs during the President’s visit.

“The Indian economy presents enormous opportunities for Croatian companies particularly under our Make in India, Smart Cities and Digital India programmes. I also invite them to forge technology and investment tie-ups in India,” Kovind said.

He also thanked his Croatian counterpart for condemning the ghastly Pulwama terror attack. “I thank Madam President for her strong condemnation of the brutal and barbaric terror attack in Pulwama in India last month. We agreed to work together to develop a strong response to defeat and destroy this evil force in all its forms and manifestations and to see accountability and action from those responsible for such barbaric acts,” Kovind stated.

Both the leaders also exchanged views on global and regional issues of concerns including UN Security Council reforms, multilateral export control regimes, and combating terrorism, according to Kovind.

Wishing Croatia success for its upcoming Presidency of the European Union, he said: “I conveyed to Madam President the importance we attach to our strategic partnership with the EU. I also noted how important it was for Europe to be strong to maintain global stability and anchor a multi-polar world.”

The President is currently on a three-country trip to Croatia, Bolivia and Chile from March 25 to April 4. His visit marks the first time that an Indian President has visited Croatia and Bolivia.

During his stay in Croatia from March 25 to March 28, Kovind is scheduled to meet with the Indian diaspora there along with addressing the Indian-Croatia business forum meeting with his Croatian counterpart. He is also slated to give a speech at the University of Zagreb on Wednesday.