The Congress party on Friday released its seventh list of 35 candidates for the upcoming Lok Sabha elections, including four from Chhattisgarh, two from Jammu and Kashmir, one from Pudducherry, five from Maharashtra, two from Odisha, eight from Telangana, two from Tripura, and six from Uttar Pradesh.

Renuka Chowdhury has been fielded from Khammam (Telangana) and Raj Babbar from Uttar Pradesh’s Fatehpur Sikri. 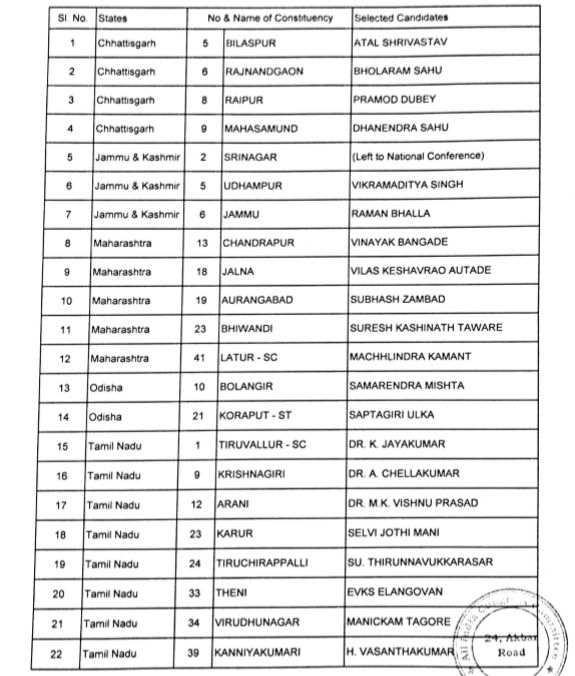 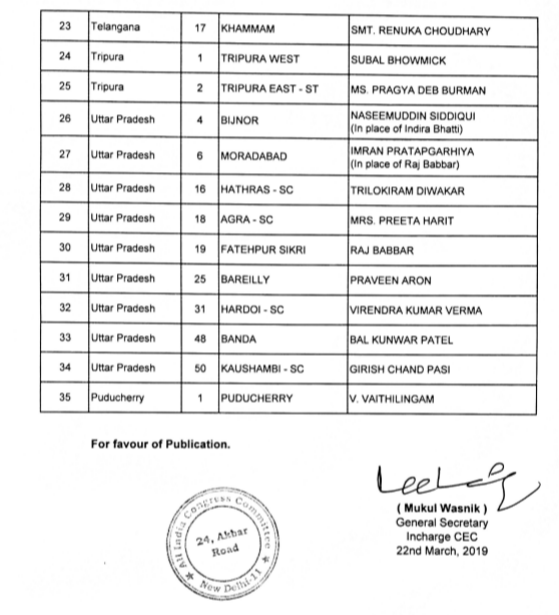 Babbar was earlier supposed to contest from Moradabad. However, he had requested a change of seat, following which he was assigned Fatehpur Sikri while Imran Pratapgarhi was assigned Moradabad.

Besides them, Preeta Harit has been pitched from Agra, Naseemuddin Siddiqui from Bijnor, and Praveen Aron from Bareilly in Uttar Pradesh.

Earlier, the Congress had chosen Indira Bhatti as its candidate from Bijnor Lok Sabha seat.

In Puducherry, the party has decided to field V Vaithilingam. He had resigned as Puducherry Assembly Speaker to contest the upcoming Lok Sabha elections.

Meanwhile, Congress leader Karan Singh’s son Vikramaditya Singh has been given a ticket from Udhampur Lok Sabha seat to contest against Minister of State (MoS) in the Prime Minister’s Office (PMO) and BJP leader Jitendra Singh. The Srinagar seat will be contested by Congress’ ally National Conference.

Seven phase elections in the country are slated to begin on April 11 and will go on till May 19. Counting of votes will take place on May 23.