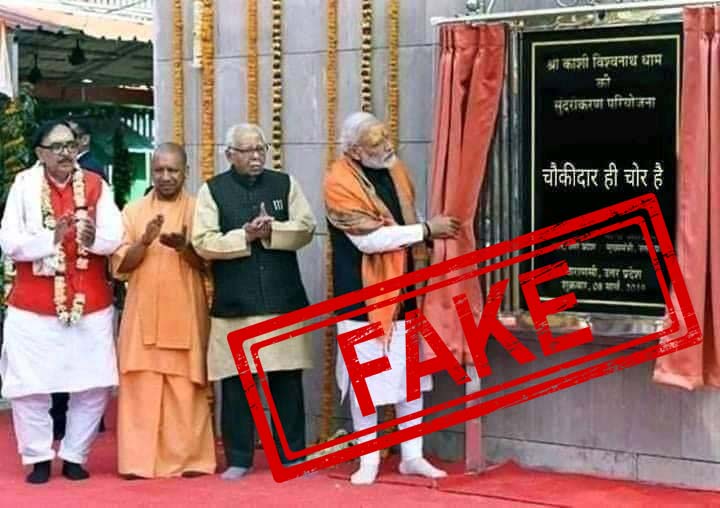 A picture of Prime Minister Narendra Modi and Uttar Pradesh Chief Minister Yogi Adityanath is making round on social media. In this picture, PM Modi is seen unveiling a plaque.

Translation: “The watchman is the thief.”

When NewsMobile fact-checked the above picture, we found that it is a photoshopped picture.

When we put the image through a reverse image search, we found the original picture which was tweeted by PM Modi’s official twitter handle.

Began my Kashi visit by praying at the Kashi Vishwanath Temple, a symbol of our culture’s pride. In the Temple complex, performed the Bhumipujan of Vishwanath Dham project, a futuristic corridor around the Temple that will benefit several pilgrims and tourists coming to Kashi. pic.twitter.com/bp8fRcMTZw

The picture was from Kashi Vishwanath Temple when PM Modi laid the foundation stone for the Vishwanath Dham project.

In the Fake vs Real comparison, it is very clear that ‘चौकीदार ही चोर है’ was written using photoshop.

Hence, the viral picture is FAKE.