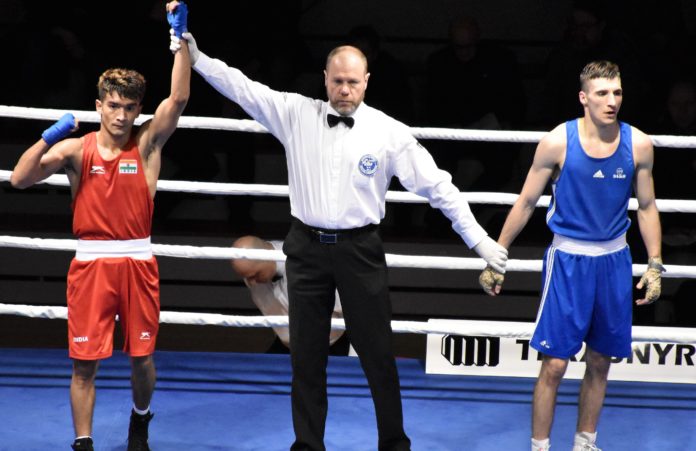 Three-time Asian medallist Shiva Thapa (60kg) and former youth world champion Sachin Siwach (52kg) were among the six Indian boxers to enter the semifinals and be assured of medals at the 38th GeeBee Boxing Tournament in Helsinki, Finland.

Thapa, a former world championships bronze-medallist, defeated Poland’s Dominik Palak 5-0 in his quarterfinal bout on Friday night after getting an opening-round bye. He will take on Russia’s Mikhail Varlamov in the semifinals.

Siwach got the better of Russia’s Tamir Galanov in a 4-1 verdict. The 20-year-old will be up against Kyrgyzstan’s Azat Usenaliev in the semifinals.

Earlier, Asian silver-medallist Sumit Sangwan (91kg) and rookie Govind Sahani (49kg) had made the semis on the back of first-round byes.

Hussamuddin defeated Russia’s Ovik Ogannisian 5-0 to set up a clash with Kazakhstan’s Zhanbolat Kydyrbayev. Kydyrbayev got a bye into the medal rounds.

In bantamweight, Bisht, who was a 52kg category quarterfinalist at the 2017 world championships, out-punched Kyrgyzstan’s Almanbet Alibekov to be assured of his maiden medal in the new weight category. Bisht’s next opponent is France’s Jordan Rodriquez.

Dagar, after creating a flutter by ousting former Olympic bronze-medallist Evaldas Petrauskas in the opening round, continued his good run to defeat local challenger Aydin Behruz. The Indian prevailed 3-2 in the bout and will square off against Russia’s Sergei Sobylinski in the semifinals.

In the +91kg category, Naveen also got the better of a local favourite in Antti Lehmusvirpi. Naveen will next take on Australia’s Justis Huni.

However, Prayag Chauhan (75kg) and Sanjay (81kg) signed off without medals after losing their respective quarterfinal bouts to Russia’s Vadim Tukov and the Netherland’s Peter Mullenberg.

Close to 100 boxers from 15 countries are competing in this tournament.