Team India captain Virat Kohli and MS Dhoni on Friday unveiled the new ODI jersey on the eve of the first match between India and Australia.

Indian women’s T20I team captain Harmanpreet Kaur was also present with Kohli and Dhoni at the launch of the new ODI kit along with Ajinkya Rahane, Prithvi Shaw and Jemimah Rodrigues.

The new kits have arrived! As the Men in Blue put on the revamped jerseys for the first time, we take you behind the scenes to know what’s changed – by @28anand

The team along with the official apparel partner Nike launched the new jersey at a ceremony at the Rajiv Gandhi cricket stadium in Hyderabad.

ALSO READ: Tim Paine rested for the Sheffield game due to injury

‘Similar to millions of Indians across the country, this team embodies a fearless spirit that we truly believe in and that’s what the world sees every time we step into the field. Over the years, our cricket has evolved – the way we approach games and embrace situations are different but what stands out is the confidence in our individual skills and our commitment to succeed as a team. This new team kit is a testament to our style of play, it is inspired by us and the new India’ said Team India skipper Virat Kohli. 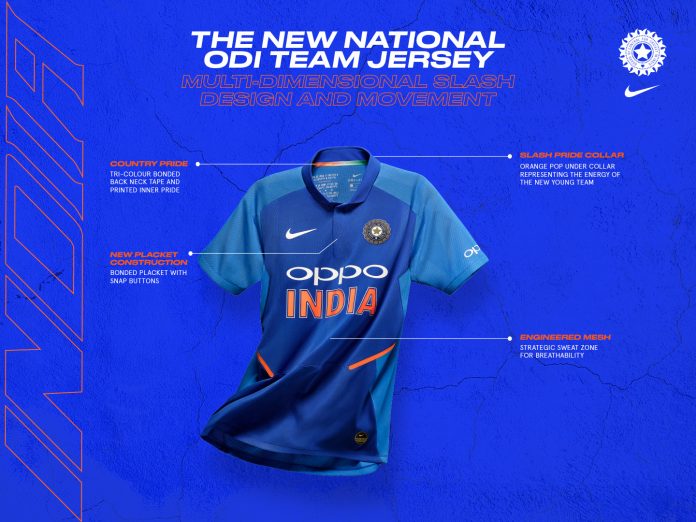 The Indian women’s T20I captain Harmanpreet Kaur was all praise. She said,‘Over the last couple of years, our team has been playing a more aggressive brand of cricket and the results have been encouraging, so has the love from the fans.  Our game too has evolved- it has become faster and aggressive. These innovations like the Slash design and movement helps the team be quicker on the field.’

The jersey’s special feature is that the dates of India’s past World Cup triumphs – the ODI World Cups in 1983 and 2011, and the T20 World Cup win in 2007 – are all emblazoned behind the back collar. ‘Taking inspiration from the stadiums and the three historic wins in 83’ 07’ And 11’, the inner pride print pays tribute to the 3 India victories while the slash pride orange under-collar represents the fearless energy of the team’, Nike said in a release.

The Team India jerseys will be available at select Nike retail across India.