The US and UK took a strong stance on the citizens who had left the respective countries to join the Islamic State.

Britain on Wednesday revoked the citizenship of Shamima Begum who had left the United Kingdom four years ago to join the Islamic State in Syria.

US President Trump said Wednesday the United States would not re-admit an American-born woman who traveled to Syria to join the Islamic State and now wants to come home.

I have instructed Secretary of State Mike Pompeo, and he fully agrees, not to allow Hoda Muthana back into the Country!

The woman, Hoda Muthana, does not qualify for citizenship and has no legal basis to return to the country, Secretary of State Mike Pompeo said.

The British Home Secretary Sajid Javid decided on Tuesday to revoke the citizenship of Shamima, who was 15 when she travelled to Syria, based on the fact that her mother has dual citizenship of the United Kingdom and Bangladesh.

While responding, Begum who is seeking to return to Britain, called the British government move ‘hard to swallow’, CNN reported.

The recent action of revoking citizenship has sparked a debate about the legality behind it. However, a spokesman for the Home Office said that the Home Secretary can deprive someone of their British citizenship ‘where it would not render the individual stateless.’

Begum, who recently gave birth to a child, also said that the move is unjust for her son.

US says dont come back Hoda

In 2014, Muthana, then a 20-year-old student in Alabama, traveled to Turkey, hiding her plans from her family. She told them she was heading to a university event.

In fact, she was smuggled into Syria, where she met up with the Islamic State and began urging attacks in the West, reported the New York Times.

Now, with the militant group driven out of Syria, Muthana says she is deeply sorry, but American officials appeared intent on closing the door to her return.

President Trump tweeted that he had directed the secretary of state ‘not to allow Hoda Muthana back into the Country!’

Pompeo issued a statement declaring that she ‘is not a U.S. citizen and will not be admitted into the United States.’ 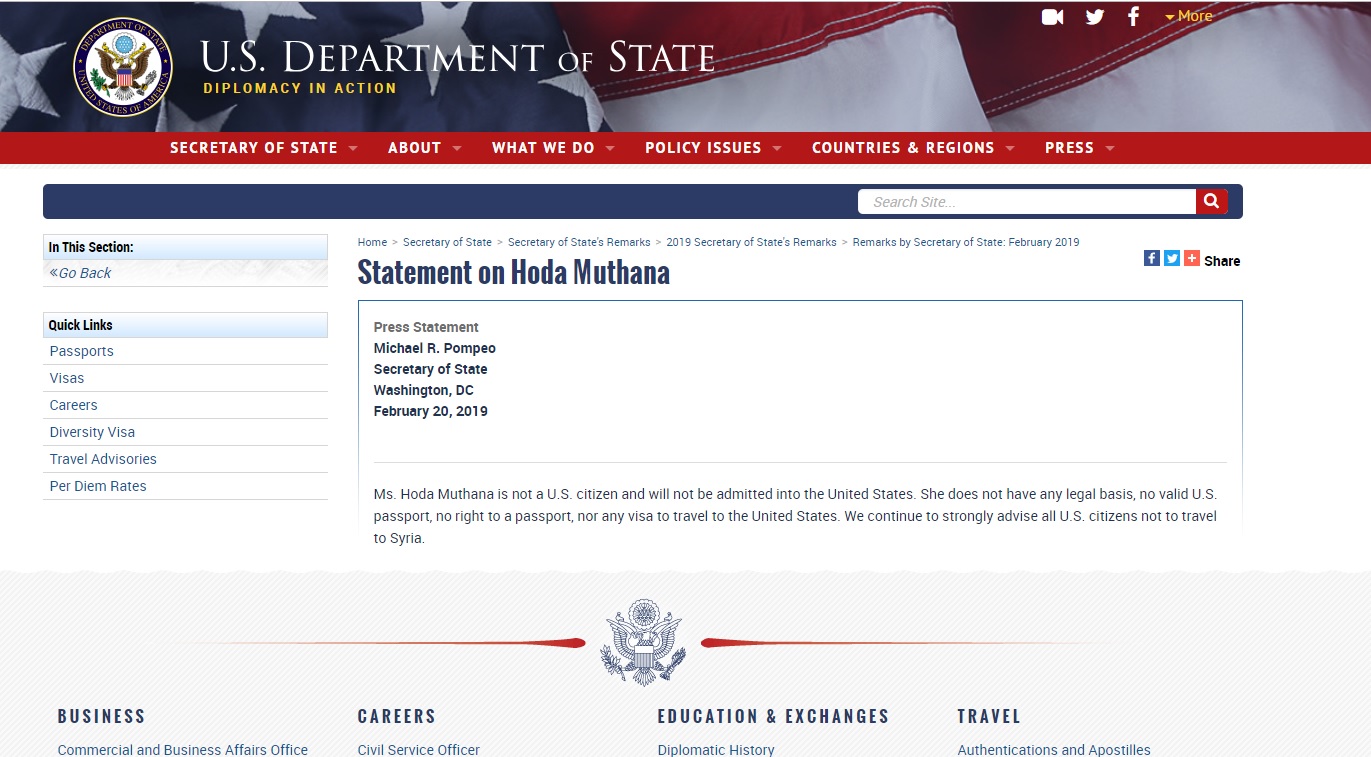 Muthana says she applied for and received a United States passport before leaving for Turkey. And she was born in the United States — ordinarily a guarantee of citizenship.

Muthana’s father was a Yemeni diplomat, and children born in the United States to active diplomats are not bestowed birthright citizenship, since diplomats are under the jurisdiction of their home countries, the New York Times reported.

That law does not apply in Muthana’s case, said Charlie Swift, the director of the Constitutional Law Center for Muslims in America, who is representing her family.  Muthana, he said, was born a month after her father was discharged from his position as a United Nations diplomat.

Now 24, Muthana escaped ISIS-held territory in January, and is in a refugee camp in Syria with her young son.

Over the weekend,  Trump said “The United States is asking Britain, France, Germany and other European allies to take back over 800 ISIS fighters that we captured in Syria and put them on trial,” he posted on Twitter. “The alternative is not a good one in that we will be forced to release them.”