The system combines the car’s position and traffic light data to suggest an ideal speed on the vehicle’s heads-up display to help you save time by driving slightly slower and avoid any red lights.

In 2016 Audi launched Traffic Light Information (TLI) which was the first vehicle-to-infrastructure (V2I) technology that provided drivers with red light countdowns; now, the company expanded the system to include the Green Light Optimization Speed Advisory (GLOSA).

GLOSA tells drivers the precise speed they need to travel at in order to catch the next green light. For example, a motorist driving between intersections at 60 Kmph might need to wait a few seconds for a red light to turn green. GLOSA detects that, and it recommends cruising at 55 Kmph to avoid stopping. 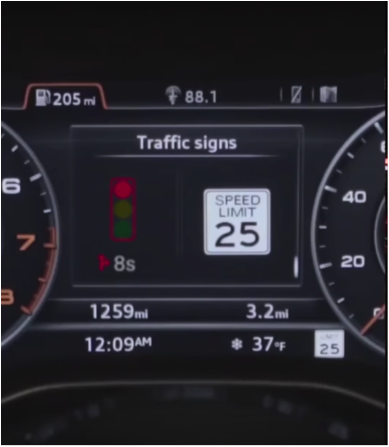 This can help improve overall traffic flow and reduce fuel consumption by reducing the repeated acceleration and braking of going from one red to another. If groups of vehicles can flow directly from one green to the next without slowing or accelerating, there is also a reduced likelihood of collisions from sudden braking events, says Rick Whittemore, Audi’s connected vehicle portfolio manager.