Home Nation Is there a welfare fund for ‘Battle Casualties and Weapon Purchase’? Here’s... 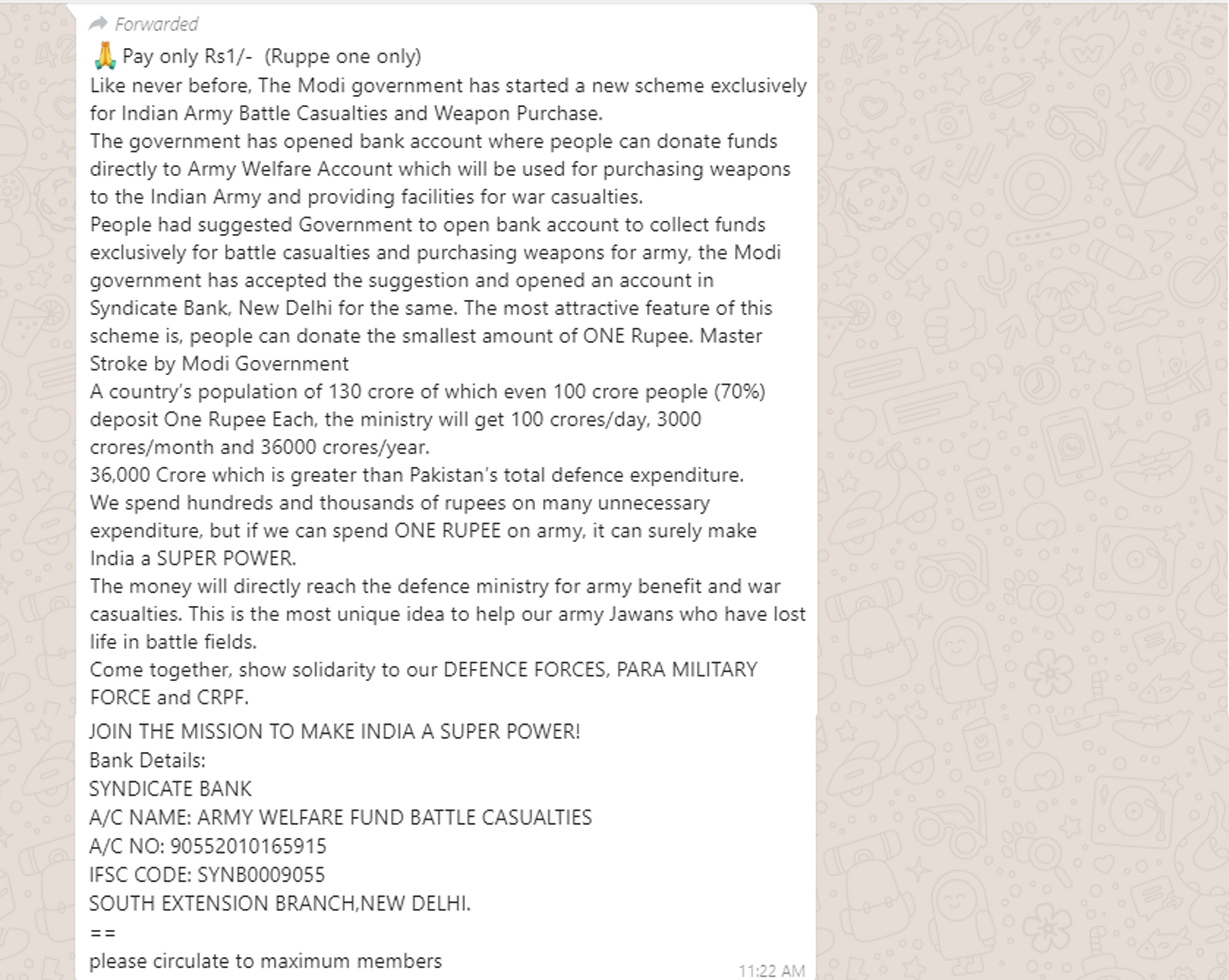 In the aftermath of the Pulwama attack, a message is going viral on WhatsApp and social media.

The message requests the citizens to make donations under a new scheme started by the Modi government exclusively for Indian Army Battle Casualties and Weapon Purchase.

” 🙏Pay only Rs1/- (Ruppe one only)
Like never before, The Modi government has started a new scheme exclusively for Indian Army Battle Casualties and Weapon Purchase.
The government has opened bank account where people can donate funds directly to Army Welfare Account which will be used for purchasing weapons to the Indian Army and providing facilities for war casualties.
People had suggested Government to open bank account to collect funds exclusively for battle casualties and purchasing weapons for army, the Modi government has accepted the suggestion and opened an account in Syndicate Bank, New Delhi for the same. The most attractive feature of this scheme is, people can donate the smallest amount of ONE Rupee. Master Stroke by Modi Government
A country’s population of 130 crore of which even 100 crore people (70%) deposit One Rupee Each, the ministry will get 100 crores/day, 3000 crores/month and 36000 crores/year.
36,000 Crore which is greater than Pakistan’s total defence expenditure.
We spend hundreds and thousands of rupees on many unnecessary expenditure, but if we can spend ONE RUPEE on army, it can surely make India a SUPER POWER.
The money will directly reach the defence ministry for army benefit and war casualties. This is the most unique idea to help our army Jawans who have lost life in battle fields.
Come together, show solidarity to our DEFENCE FORCES, PARA MILITARY FORCE and CRPF.
JOIN THE MISSION TO MAKE INDIA A SUPER POWER!
Bank Details:
SYNDICATE BANK
A/C NAME: ARMY WELFARE FUND BATTLE CASUALTIES
A/C NO: 90552010165915
IFSC CODE: SYNB0009055
SOUTH EXTENSION BRANCH,NEW DELHI.
==
please circulate to maximum members”

This message is true to a certain extent.

In 2016, Indian soldiers lost their lives in an avalanche in Siachen. The Indian Army then set up an account ‘Army Welfare Fund Battle Casualties’ at the Syndicate Bank to help the army personnel financially.

The Syndicate Bank also issued a release regarding the fund in 2016. 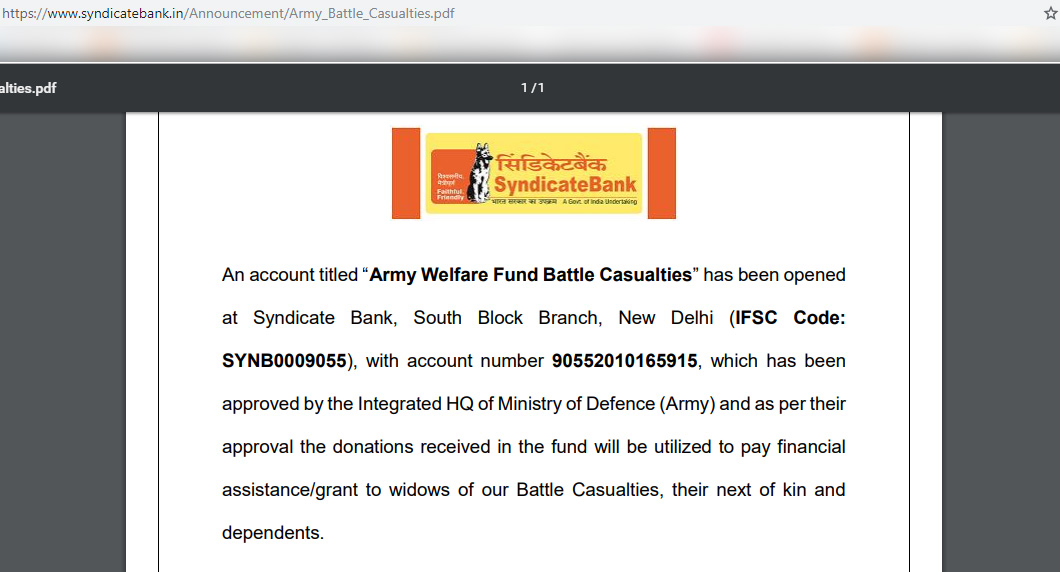 Though the details regarding the account are correct, the viral message also states that the fund was made for ‘Weapon Purchase.‘

According to the clarification provided by the Indian Army in 2016, this account was made to accept donations for families of battle casualties. It says that the donations made towards fund will be used to provide financial aid to the widows and families of the soldiers.

However, the aspect regarding the Weapon Purchase is not mentioned anywhere. 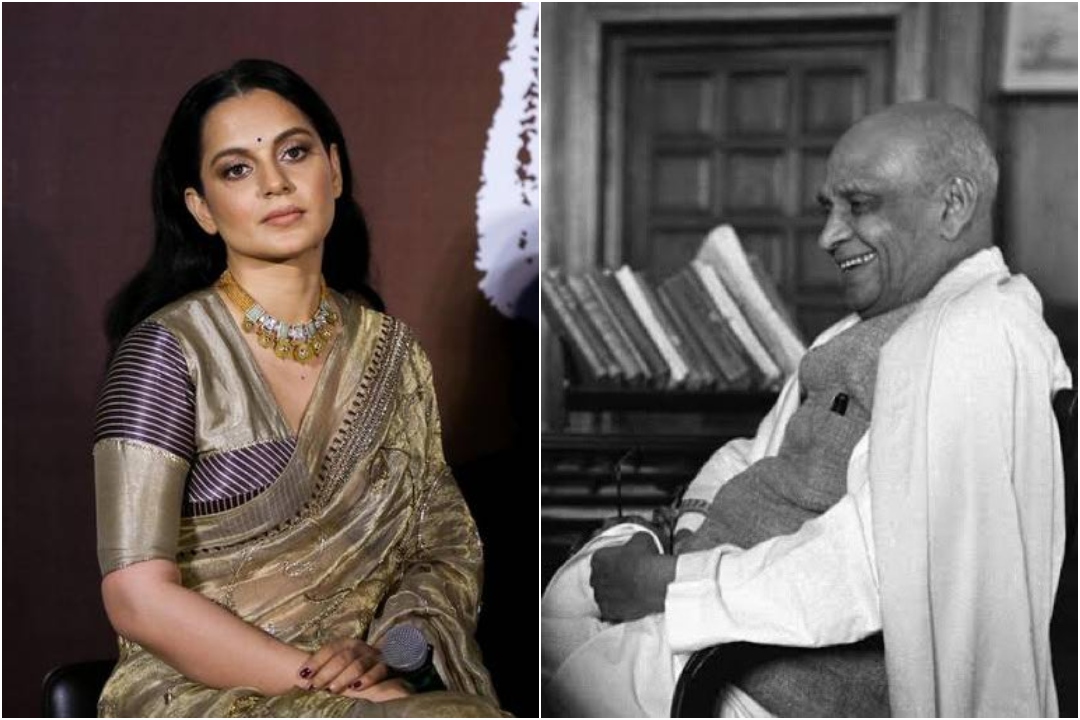