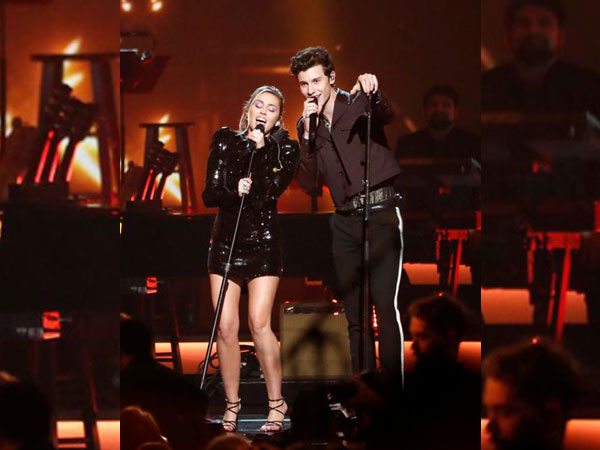 In what turned out to be a magically beautiful event, Miley Cyrus, Shawn Mendes and a host of other celebrities recently teamed up to pay a special tribute to the legendary country singer Dolly Parton.

The 73-year-old iconic singer was the guest of honour at the 2019 MusiCares Person of the Year gala at the Los Angeles Convention Centre. The annual gala takes place before the Grammy Awards, reported E! Online.

Parton was honoured as the MusiCares Person of the Year for her significant creative achievements, her long music career and offering support for many charitable causes.

At the event, Cyrus introduced Parton to the crowd by saying, “She’s not just my fairy godmother, she’s everyone’s.”

“Dolly is someone that just continues to give, whether it’s giving us music, giving us inspiration. She’s taught us all so much and we were just saying, it’s about time that this happened. No one I think deserves to be honoured tonight more than Dolly, not just because of her talent, but because of every bit of giving that she does and that’s what MusiCares is about,” Cyrus told E! News.

“Hi y’all, this is the best night ever-you get to listen to Dolly Parton songs the whole night,” Cyrus said while addressing the crowd.

American actor Reese Witherspoon took to the stage to later thank Parton saying that she is her idol and inspiration.

Singers Katy Perry and Kacey Musgraves sang Parton’s 1977 song ‘Here You Come Again’.”We love you Dolly. We want to be just like you when we grow up,” Perry said.

A special video was also shown as a tribute, showcasing footage of the singer from her past years, as well as a clip of the late Whitney Houston in ‘The Bodyguard’, whose soundtrack features her hit cover of Parton’s ‘I Will Always Love You’.

“Now, I want to thank all of you for this wonderful night,” Parton later said in her acceptance speech.

“I truly am honoured to be MusiCares person of the year, and the first country artist to be honoured. Of course you know us Hillbillies, we need things too. We may not have had the sex, drugs and rock n’ roll, but two out of three ain’t bad tonight. Right, Billy Ray Cyrus?” she added.

Talking about her music journey, she said, “I have been in music for a long time, but it has been in me a lot longer. I used to stand, stand out on the porch. Mega Mellow Tennessee mountain home. I used to put a tobacco stick down in the crack in the floor, put a tin can on top of it and pretend like I’m singing on Grand Old Opry course onstage with the chickens and the ducks and the pigs and the little kids…but it was my dream and it’s a long, long way from the hills of east Tennessee, the Hollywood Hills. But it has been a wonderful journey.”

At the 2019 Grammys, Parton will perform a medley of her songs with Cyrus and other singers.