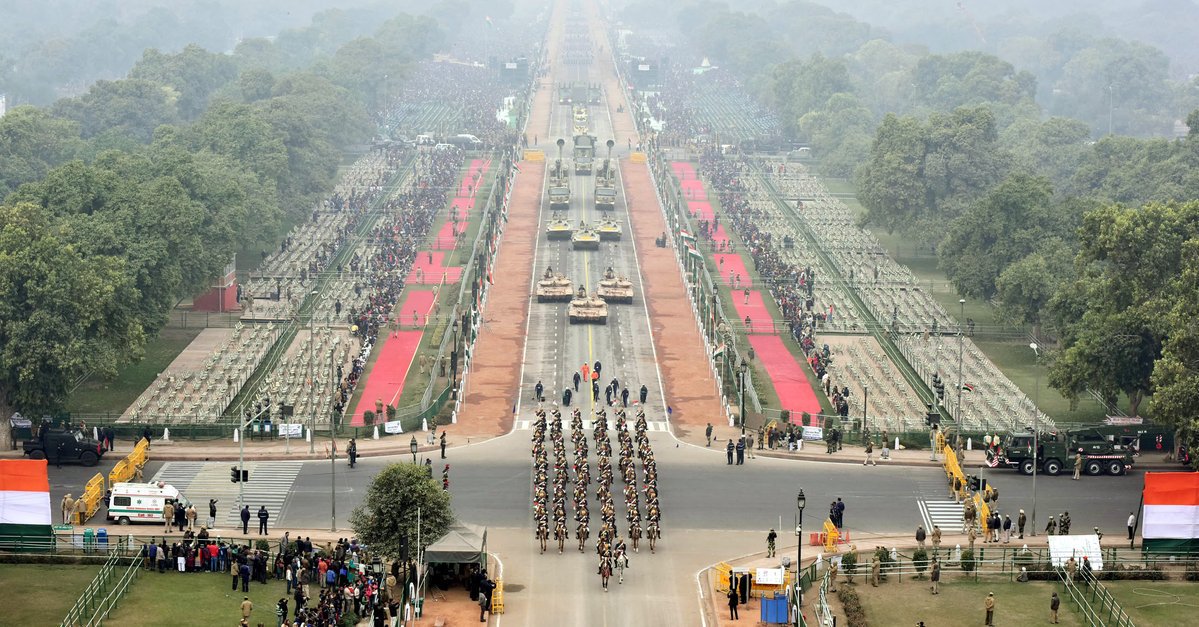 With South African President Cyril Ramaphosa watching the proceedings, India on Saturday displayed its military might and rich cultural diversity during the dazzling 70th Republic Day parade in the Capital which for the first time saw veteran soldiers of the Indian National Army walking down the Rajpath.

The Republic Day Parade Ceremony commenced with Prime Minister Narendra Modi leading the nation in paying homage to soldiers killed in combat by laying a wreath at the Amar Jawan Jyoti at India Gate.

The parade commanded by Lieutenant General Asit Mistry, General Officer Commanding, Headquarters Delhi Area, commenced after the unfurling of the national flag and a 21-gun salute. The parade commander was the first one to salute the President.

This year veterans of the Indian National Army (INA) who fought valiantly against the imperial forces also took part in the parade, including four veterans Parmanand, Lalti Ram, Hira Singh and Bhagmal, who are aged between 95 to 100 years.

The K-9 Vajra and the M777 howitzers took part in the parade for the first time this year.

The marching contingents of the Army which followed the armoured columns in the parade included the Madras Regiment, the Rajputana Rifles, the Sikh Regiment, the Gorkha Brigade, the Army Service Corps, and the 102 Infantry Battalion (Territorial Army) Punjab.

The marching contingents were followed by the Veterans’ Tableau, which marked recognition and respect to the soldiers’ selfless service to the nation.

The Combined Band of the Sikh Light Infantry, Mahar Regimental Centre and Ladakh Scouts played the martial tune ‘Shankhnaad’ for the first time in the Parade.

The Air Force Marching Contingent comprising 144 air warriors marched with rifles in ‘Bagal shashtra’ position while the pistols of the officers were secured in their holsters. It was followed by the Air Force Tableau titled ‘Indian Air Force Encouraging Indigenisation’ showcasing the scaled-down models of the aircraft, radar and missile system which have been indigenously designed and manufactured. The models displayed were Light Combat Aircraft (LCA), Low-Level Light Weight Radar (LLLWR), Sukhoi-30MKI and Akash Missile System.

Twenty-two tableaux, comprising 16 from different states and union territories and six Ministries, Departments and other institutions displayed the life, times and ideals of Mahatma Gandhi. The year 2019 marks the 150th birth anniversary of the Father of the Nation.

The tableau of Sikkim portrayed the state’s transformation into a 100 per cent organic farming and the cleanest state of the country in consonance with Mahatma Gandhi’s vision and ideal while Maharashtra portrayed Quit India Movement, which was a peoples’ movement in which millions of common Indians had participated. The tableau of Andaman & Nicobar showcased the role of Gandhi among the inmates of Cellular Jail in Andaman.

Assam came up with a tableau depicting Gandhiji’s movement in Assam and his dream of rebuilding the rural economy by encouraging the growth of cottage industry.

The tableau of Tripura showcased the egalitarian, inclusive and diverse social and ethnic culture based on the Gandhian principles while the Goan tableau showcased Unity in Diversity.

Arunachal Pradesh depicted peace within through a tableau of a clean Monpa village and its peaceful, cultural life which Mahatma Gandhi envisioned. Jallianwala Bagh was the theme of Punjab tableau evoking memories of the watershed moment in the Independence struggle.

Tamil Nadu showcased Transformation of Dress Code of Mahatma Gandhi on September 22, 1921 in Madurai after seeing scantily clad peasants and poor people working in the farms and doing other manual work.

Tableau of Gujarat depicted Mahatma Gandhi’s ‘Historical Dandi March’, which shook the foundation of the British Empire by scooping a handful of salt in the coastal village of Dandi in Gujarat. ‘Ray of Hope-Our Composite Culture’ was the theme of tableau of Jammu and Kashmir while Karnataka showcased Gandhiji’s momentous efforts at the Belagavi Congress session on 26-27 December 1924.

Twenty-six children including six girls and 20 boys, Awardees of Pradhan Mantri Rashtriya Bal Puruskar 2019 for their exceptional achievement, also participated in the parade. The awards have been given to children for their merit in the fields of innovation, scholastic, sports, arts, culture, social service, music, bravery or any other field which deserves recognition.

Corps of Signals Motor Cycle Team saluted the president with daredevil acts in the Parade under the dynamic leadership of Captain Manpreet Singh, who broke his own world record smartly from a 12.5 feet ladder. The previous record was from an eight-feet ladder.

Trailing them was the ‘Sutlej Formation’ which is AN 32 aircraft flying in ‘Vic’ formation. Behind the ‘Netra’ formation was the ‘Globe’ formation, comprising one C-17 Globemaster flanked by two Su-30 MKIs. One of the An-32s was for the first time flying with bio-fuel.

The culmination of the parade was marked by a lone Su-30 MKI flying at a speed of 900 km/hr splitting the sky with a ‘Vertical Charlie’ manoeuvre over the saluting dais. The ceremony culminated with the national anthem and release of balloons.