Right-hand Cheteshwar Pujara played a knock of 123 runs to take his side’s total to 250 runs at the loss of nine wickets at the end of Day One of the ongoing first Test against Australia at the Adelaide Oval on Thursday.

Pujara’s knock helped India pull out. They were in dire straits at lunch, having lost four wickets at the meagre score of 56 with almost all of their top-order batsman back in the pavilion. Pujara, along with middle-order batsmen and tail-enders, knitted small partnerships to take India’s score to a respectable total.

At tea time India was 143/6, with Pujara holding the fort at one end at 46 and Ashwin on the other. With this century Pujara brought up his 16th Test ton and completed 5000 Test runs. 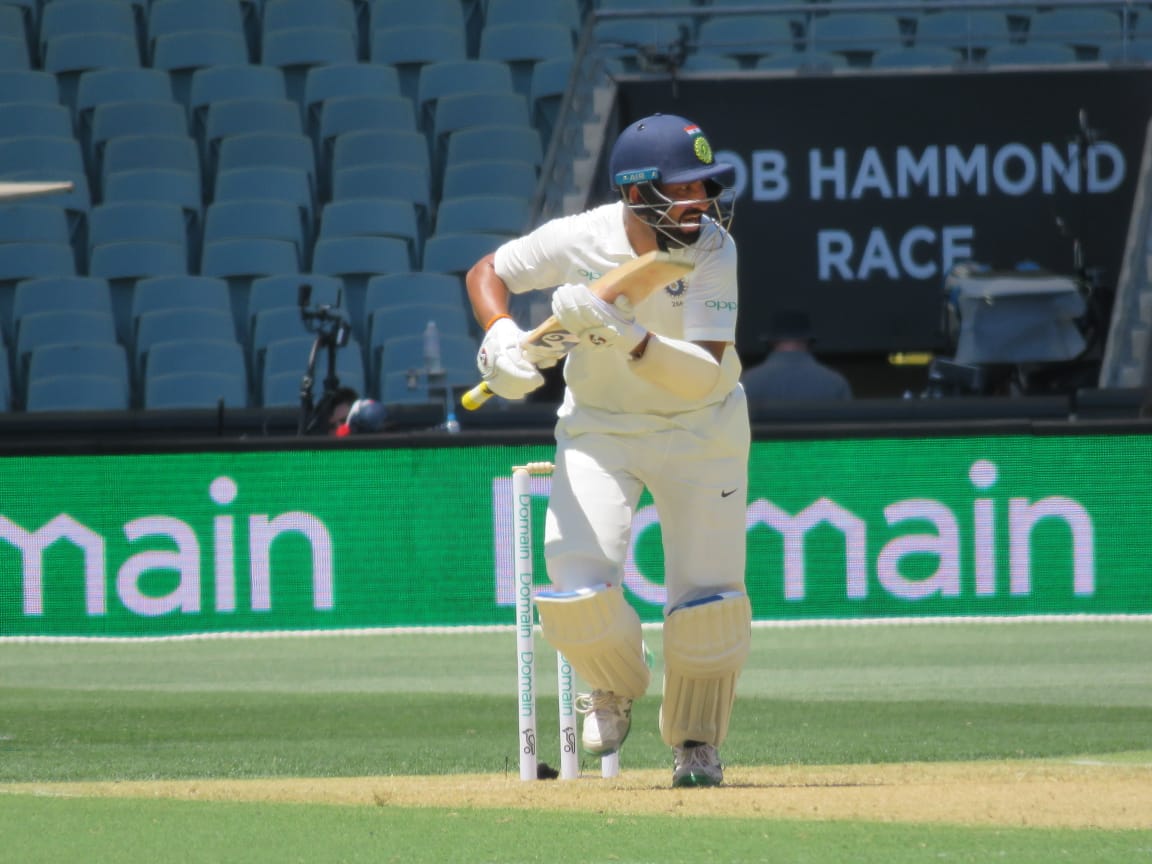 Nathan Lyon got his second wicket with Rishabh Pant departure after scoring 25 and India, which chose to bat, at 127/6.

At lunchtime India was at a dismal 56 runs at the loss of 4 crucial wickets at the Adelaide Oval.

Opting to bat first in the scorching morning at Adelaide, India sent their right-hand batsmen KL Rahul and Murali Vijay to open the innings. With some accurate bowling and brilliant fielding efforts, Australian bowlers easily unsettled the opening pair who looked tentative on the crease.

India lost their first wicket in the form of KL Rahul who played a loose shot off Josh Hazelwood’s delivery and was caught by Aaron Finch at the third slip. Rahul departed at a meagre score of 2 runs.

Right-hand batsman Cheteshwar Pujara walked on to the crease at number three and India now had two of their best Test batsmen to take the innings forward. Pujara and Vijay started to build the innings but the Australian pacers came into the picture again and gave another jolt to the Indian side in the form of Murali Vijay.

Pacer Mitchell Starc bowled an absolute stunner at an awkward length to Vijay and enticed him to play a drive. The ball nicked and went straight to the hands of wicket-keeper Tim Paine. Vijay was gone for 11 runs.

Indian skipper Virat Kohli, who holds a tremendous record in Adelaide and had also scored his first Test hundred on this ground, walked in amid huge expectations and pressure. Playing at the score of 3 runs, the right-hand batsman drove a Pat Cummins’ delivery which was angling away from him. Kohli was deceived and Usman Khawaja made a superb effort to pluck the catch with his left hand. With Kohli’s wicket, Indian hopes of making a comeback started to shatter.

Now it was time for another Test specialist batsman Ajinkya Rahane to come on the crease and join Pujara in order to provide much-needed balance to the stumbling Indian batting order. But the script for the Indian batters did not change. Rahane lost his wicket in the most typical fashion as he edged an outgoing delivery of Josh Hazelwood and gave a simple catch to Peter Handscomb in the second slip.

R Sharma made 37 runs before being caught by Marcus Harris, R Pant fell when India were 127/6.