IIT Madras has surrounded itself in the middle of controversy as after hostel office allegedly put up a list of students on the notice board who were charged for using banned items inside hostel premises.

It came as a shocker when the list also included the name of a student caught with ‘used condoms’ inside his room. The incident took place last week on November 29. Irate students are up-in-arms against the hostel authorities and are terming the incident as a violation of their privacy and dignity.

During a vigilance check at Brahmaputra men’s hostel, authorities found several banned items, however, in one of the rooms, the authorities stumbled upon 20 cigarette butts, matchboxes and “used condoms” in the dustbin. 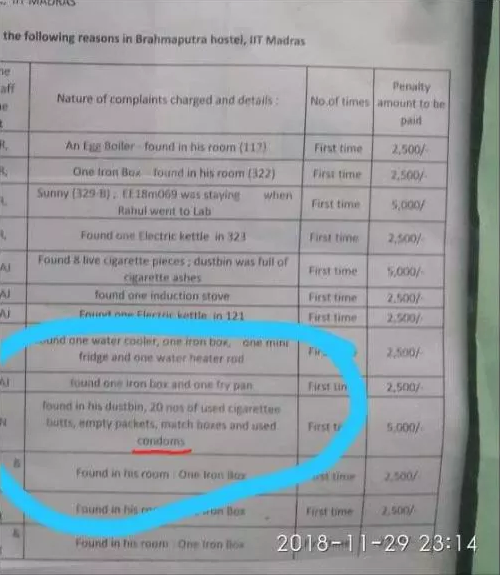 The hostel authorities imposed a fine of Rs 5,000, and also publicly named the student for possessing condoms. The image of the hostel’s notice was shared on Reddit and has provoked discussion.

Other items that were mentioned in the list were:

After the incident, many female students have also come forward with their stories and disclosed ill-behaviour portrayed by the hostel staff. After the students expressed their anger over lack of respect for their privacy, many people on social media supported their stand for having a callous attitude.