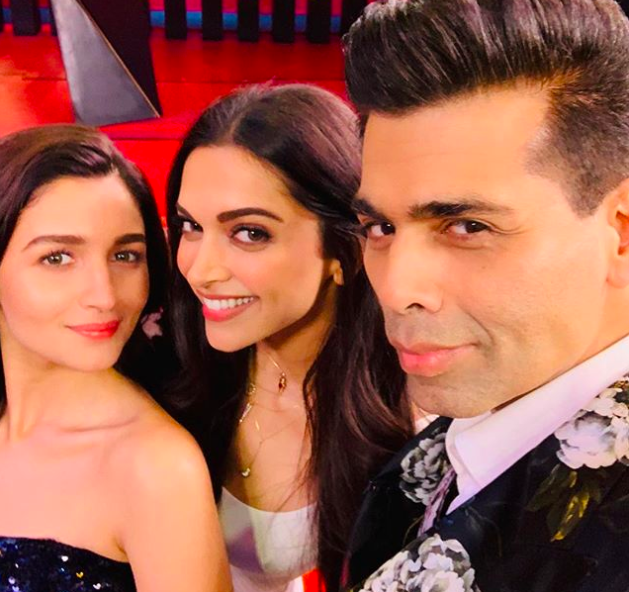 Karan Johar’s talk show ‘Koffee with Karan’ is coming back yet again with the full drama, amazing superstars and not to forget the ‘Koffee Hamper’. The first to be on the show is the stunning Alia Bhatt and Deepika Padukone.

ALSO READ: Rejoice Koffee With Karan fans! Saif and Sara Khan to be the first duo…

The promo video of the season 6, which starts on October 21, opener show with Alia and Deepika has been released and both of them talk to Karan about ‘the elephant in the room’. Did you guess it right? It’s most likely Ranbir Kapoor who is currently Alia’s boyfriend and Deepika’s ex.

Girl power in the KOFFEE house!!! Fun and games are about to begin! #koffeewithkaran from the 21st of October on @starworldindia at 9pm! @hotstar @deepikapadukone @aliaabhatt

However, when Karan began talking about Ranbir, Deepika said, “Don’t try and make it awkward because it was not.” The next clip shows Alia letting out a loud burp and instantly feeling embarrassed about it. “Did you just burp on national television?!” Karan exclaimed at Alia who had her face buried in her lap. Deepika, meanwhile, roared with laughter at Alia’s expense.

Karan also asked both about getting married to which both reply, pointing fingers at each other. Karan and Alia called Deepika a liar and she planted a big kiss on Alia’s cheeks.

ALSO READ: Koffee With Karan 6: These actors are going to replace Virat and Anushka in…

The new season premieres on October 21 on Star World. Other guests on the show include Ranveer Singh and Akshay Kumar, Saif Ali Khan and Sara Ali Khan and Arjun Kapoor and Janhvi Kapoor.
ShareTweetGoogleWhatsappPrint
Mail