New Delhi: The Delhi Police on Friday detained Rohit Tomar, son of a sub-inspector, for brutally thrashing a woman in Delhi’s Tilak Nagar, just three days after having initially detained him before letting go.

A video emerged on social media, wherein Rohit could be seen brutally beating up a woman. Upon further investigations, it was found out that the attacker is the son of a Delhi Police official, and he thrashed the girl after she refused to marry him. 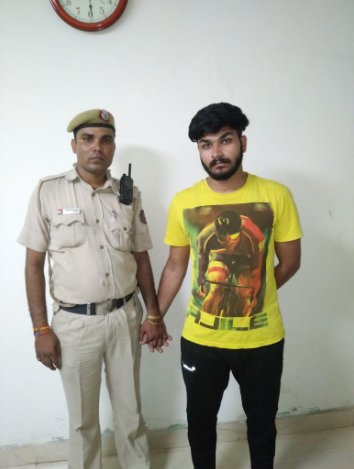 The incident took place on September 2, when a video was recorded of Rohit kicking and slapping the hapless girl, who is pleading for help. Rohit was detained by the Police on Friday afternoon, and an FIR under section 354/506 of the IPC has been charged against him.

A complaint in this respect was lodged by another girl who was also threatened by the accused. As per the complaint, the two were in a relationship, but it went awry, which was not taken at all well by Rohit. He forced her to marry him, and upon refusal, brutally thrashed her saying his father was in Delhi Police and no one will touch him.

Rohit was first detained by the cops on September 11 but was let go on September 12 after an FIR of a ‘simple scuffle’ was registered.

Even the Home Ministry interfered in this matter, with Rajnath Singh promising action after speaking with the Delhi Police Commissioner. He took to Twitter to assure justice to the girl. His message read, “A video of a girl being beaten brutally by a young man has come to my knowledge. I have talked about this on the phone with the @DelhiPolice Commissioner and asked him to take appropriate action on this.”