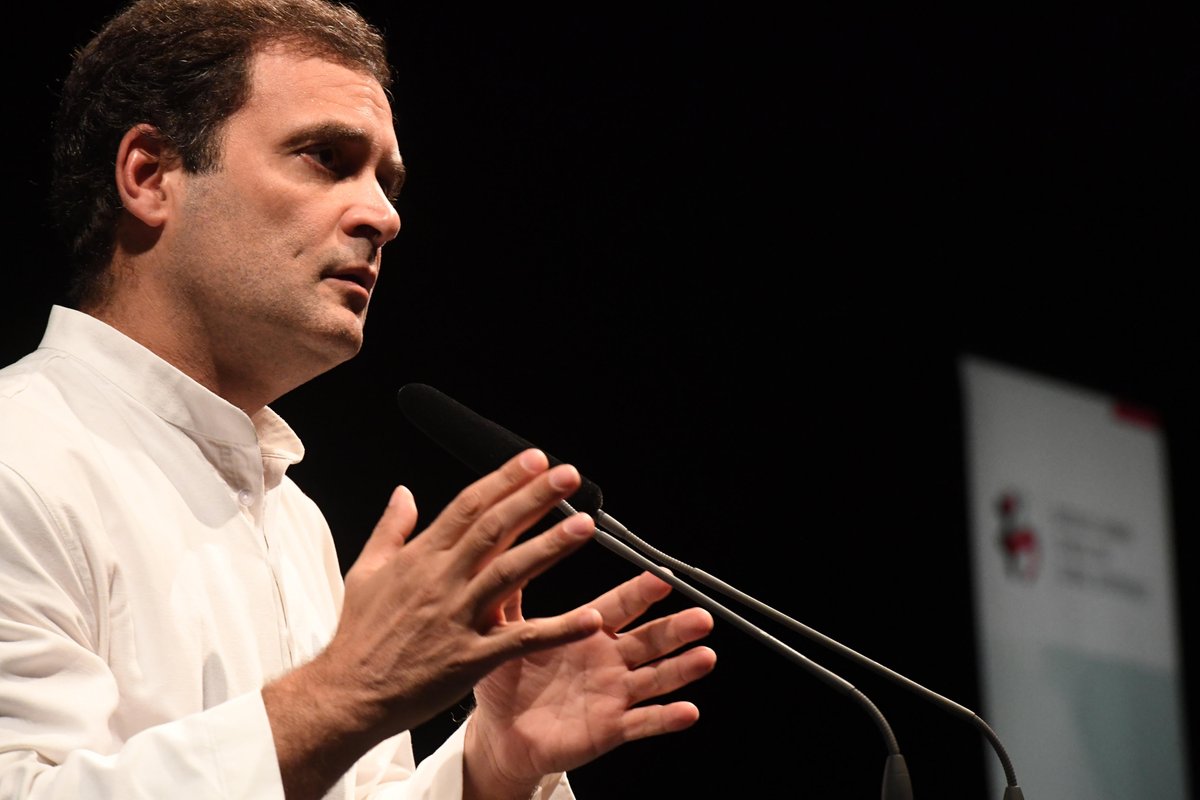 On the second day in Germany, Rahul Gandhi attacked the divisive politics of the Rashtriya Swayamseva Sangh (RSS) and the Bharatiya Janata Party (BJP) and stated that the ruling party’s ideology is in contrast with that of Congress’.

Though his speech could not be telecast live on Thursday, the Indian National Congress posted an eight-minute video of the party president Rahul Gandhi’s speech on their Twitter handle.

On his second day in Europe, Rahul addressed a group of Indians living in Berlin. Rahul said that presently Congress’ job is ‘to unite people and focus on development’. He referred to the current government and said ‘BJP and RSS are working to divide our own people and spread hate in our own country’ instead of watching over India’s actual competition, which is China.

While talking about job opportunities in China and India, Rahul said that the Chinese government employs 50,000 youths every 24 hours, where as Indian government manages to employ only 450 youth.

‘He added, “There are long speeches but farmers end up committing suicides. Youths see no direction.”

The Congress had earlier said that Rahul’s address could not be aired ‘live’ due to a technical glitch, but later tweeted out the full video of his speech.

“BJP, RSS people are trying to divide India by spreading hatred among people but we won’t let that happen. Our work is to keep India united…we have done that in the past and we will continue to do so,” Rahul Gandhi said.

I began my 2 day visit to Germany with a speech at the Bucerius Summer School in Hamburg, yesterday. Today, I am in Berlin to meet members of the German Bundestag, NGO’s & Business Leaders. I will also be addressing a public meeting organised by the Indian Overseas Congress. pic.twitter.com/11omr91GI3

Earlier, he had addressed a gathering at the Bucerius Summer School in Hamburg, Germany where he cited the creation of Islamic State terrorist group to warn against a similar situation in India if people are excluded from the development process, triggering a huge uproar with the BJP demanding an explanation.

“Rahul Gandhi does not leave any moment to insult India. We forgive you usually, but what you spoke yesterday can have dangerous implications, so we want you to explain this time,” BJP spokesperson Sambit Patra said.

The Congress president had said the BJP government has excluded tribals, Dalits and minorities from the development narrative and “this could be a dangerous thing”. Citing the example of Islamic State (ISIS), he said that exclusion of a large number of people from the development process could lead to the creation of insurgent groups anywhere in the world.