Home NM FACT CHECKER On a trip to old age home, did this girl find her... 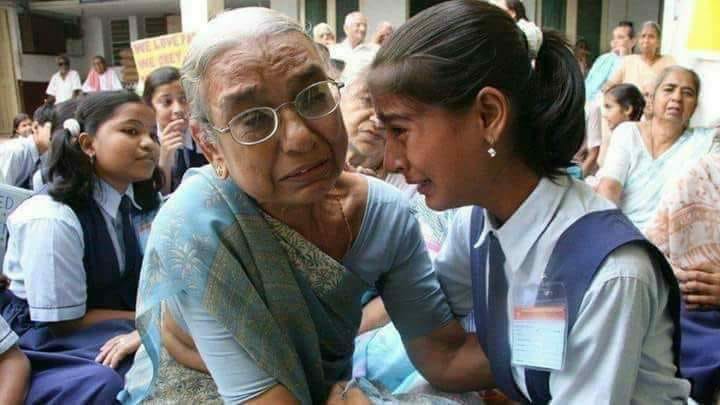 A school organised a tour to an old age home and this girl found her grandmother there. When she used to ask her parents about the whereabouts of grandma, she was told that she has gone to meet her relatives. This is the society we are creating…#Heart_touching.. pic.twitter.com/fHRFVFAFyx

According to the viral post, the girl kept asking her parents about her grandmother but they always rested the question by answering that she has gone to some relative and will stay there, but when she looked at her grandmother in the old age home she couldn’t control herself.

The post went so viral that it was even shared by the Indian Cricketer Harbhajan Singh, saying “Shame on such people”. The post was also shared by many Twitter users and the picture took the internet by storm as well as made the internet users emotional.

Shame on such people… https://t.co/I589oDJMqw

The truth behind the heart touching picture:

The picture is over a decade old. It was taken in 2007. On September 12, 2007, photojournalist Kalpesh S Bharech got a call from the principal of GNC School in Maninagar, Gujarat. He requested Bharech to cover a school trip to the Manilal Gandhi old age home in Ghodasar.

Bharech agreed and reached the old age home. During the field trip, Bharech asked the school children to sit with the elderly so that he could take some good photographs.
As the children got up, one of them, screamed and cried while running to an old lady in another room.

“We all became speechless. After taking pictures, when I asked her, Baa [the old lady] said the girl was her granddaughter,” Bharech shared in an article on BBC Gujarati.  “It became a topic of debate in almost all of Gujarat. This picture shook the people,” wrote Bharech.

The picture went viral after 10 years on World Photography Day when BBC Gujarati had asked journalists from across the state to share the best photo stories of their career.

When Kalpesh S Bharech shared this story with all his pictures, social media quickly picked it up and, hence, the story went viral.

BBC Hindi conducted an interview with the ladies and the photographer in 2018. In that interview, the schoolgirl, Bhakti, clarified that her grandmother Damyanti behen was willingly staying at the old age home.

She said that she was aware that her grandmother was leaving to stay at an old age home but not sure which one and had an emotional outburst when she saw her.

What the full interview here