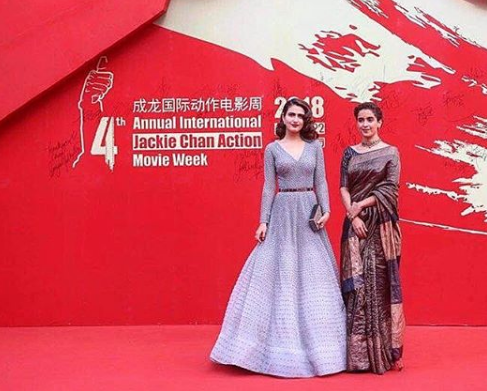 After Aamir Khan’s popularity in China, it’s the turn of his reel life daughters- Fatima Sana Shaikh and Sanya Malhotra. With their mesmerizing and power-packed performances as Geeta Phogat and Babita Phogat in Dangal, both won the ‘Action Awards’ at the fourth annual Jackie Chan Film Action Movie Week on Monday.

Their wrestling scenes not only helped the film to create a record at the Indian box office, but it was ranked number one in an annual survey conducted by the Chinese IMDB.

The Jackie Chan Film Action Movie Week was held at the Shanghai Film Festival on Monday. Both the actresses took to Instagram to share their happiness when they met renowned action superstar Jackie Chan.

Just had a fan girl moment!! In love with him!! It was such a pleasure to meet him, such a charming, kind and an amazing person he is.. Thank you so much for inviting us for your event. #whataman #jackiechan #love @jackiechan

Met a legend who’s so humble, gracious and hospitable. Thank you so much @jackiechan for having us at #jackiechanactionmovieweek . Looking forward to watch the closing ceremony and especially the performance by your team ♥️#jackiechan#dangal

On the professional front, Fatima will share the screen with Aamir Khan in ‘Thugs of Hindostan’, to be released this Diwali, while Sanya will be seen alongside Ayushmann Khurrana in ‘Badhaai Ho’ scheduled to hit the screens on October 19, 2018.