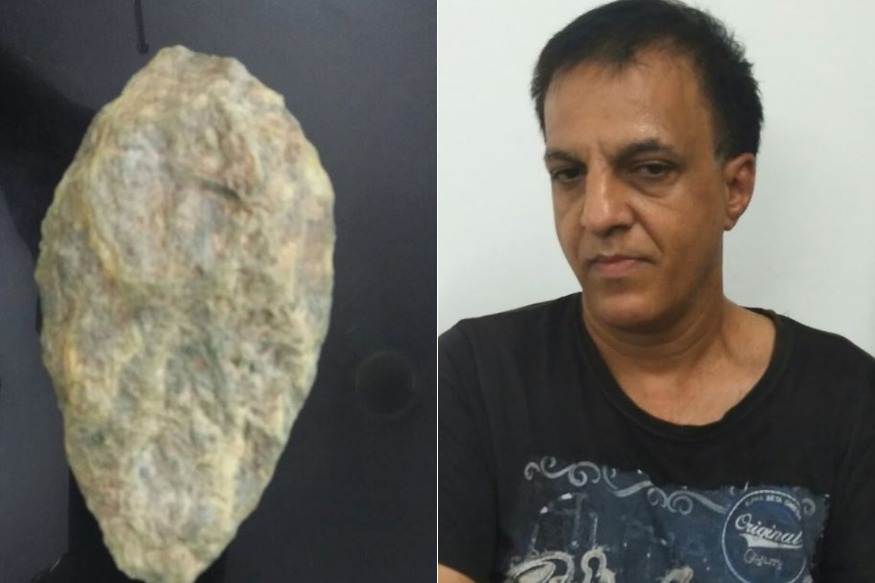 Uday Ratra, a 53-year-old from Gurugram was picked up by the cops at 3 am yesterday from his farmhouse for allegedly stealing a replica of the ancient ‘Olduvai Handaxe’ from the National Museum at Janpath.

Stealing precious artifacts from museums and getting away with it may look easy on-screen but, reality is far removed from the screen versions that set your adrenaline pumping. Whether the Gurugram millionaire, Uday Ratra is a kleptomaniac or an attention-seeker is anybody’s guess and a psychologist’s dilemma but, he was caught promptly by the Delhi Police based on the recording of the incident on the museum’s CCTV camera.

The “theft” did not look like it was pre-meditated. It was as Ratra told the police later, he picked it up because he “liked it.”

Though it is not sure if it was a very expensive museum piece as it was a replica and was left in the open for anyone to pick up and walk away with.

However, according to DCP South Delhi Madhur Verma’s tweet, this is what happened,

That’s how, the ‘Olduvai Handaxe’ theft from National Museum got detected and accused identified. CCTV cameras are of great help both in crime prevention and crime detection. pic.twitter.com/xwkPl9hyFA

Ratra “picked up” a rare artifact from the National Museum in Delhi like he would pluck a flower from a blooming tree in a neighbour’s garden. He took it in his hands, admired it and put it in his pocket before walking out with it.

The museum handed over their CCTV footage to the Delhi Police who lost no time in nabbing Ratra from his posh Gurgaon home full of eight scary barking dogs who tried attacking the cops with bark and bites. Ratra even got into an alleged fist fight with the officers who tried to nab him.

Finally, he was caught making a beeline out of the back door with the said artifact on his person. A classic case of ‘catch me’ if there was any.

Ratra is not new to the life of misconduct. He was living in the UK for 20 years after finishing his education in journalism from Delhi but, was deported back to India. He never married nor does he have children. But, he allegedly told the cops that he liked the artifact and wanted to show it to “his children”.

As pointed out earlier, this is not his first offence. Ratra who lives with his parents in the city’s outskirts, had been booked in 2016 for shoplifting at a wine store in south Delhi. He was easily caught even then with the goods hidden inside his jacket. He went on and got himself into further trouble thereafter by stealing his file from the court where his case was being heard. This led to another case of theft being slapped on him.

But, none of these cases sound as bad as what he tried to pull off when the then US Secretary of State, John Kerry was in town the same year. He allegedly tried to get into the hotel where the American politician was staying with a switchblade. Needless to say that he was caught and had ended up making news even then. The police had released a statement at that time saying that this was not the first time he had been caught trying to create nuisance when a foreign dignitary was visiting. The hotel staff too knew him well because of his particular penchant for appearing when foreign dignitaries were in town.

“He is mentally unstable. He was roaming around in the lobby of the hotel. The hotel security staff knew him as in the past too he had tried to enter the premises when foreign dignitaries were visiting,” a senior police official had said then. It was reported that when Ratra was asked to leave the hotel premises, he had started quarreling with the hotel security staff.

“The hotel staff called the police and they rushed to the spot and apprehended him before he could create further trouble. He was not aware of Kerry’s presence. It is a co-incidence that he came to the hotel on the day. When he was searched, a blade was found on him,” added the official. The police had however added that Ratra has a history of creating nuisance when foreign dignitaries come.

“Even the US Embassy had informed us in advance on August 1 that he might create nuisance. The Canadian Embassy had also written about him once.” the officer had said. Ratra was then booked under IPC sections 353 (assault or criminal force to deter public servant from discharge of his duty) and 386 (extortion by putting a person in fear of death or grievous hurt).

His father has earlier served the Coast Guard as an inspector general. So, Ratra obviously has no dearth of money or clout that very easily moves Delhi.

Prima facie his looks like a case of a man who wants to be caught to get attention. But, the jury is out on that and since we are not clinical psychologists we cannot make assumptions based on a series of misconducts that Ratra has carried out over the years. But, now he is caught and making news once more but, we can’t but help think that he will have a go at it once more. Keep your eyes out for Uday Ratra.