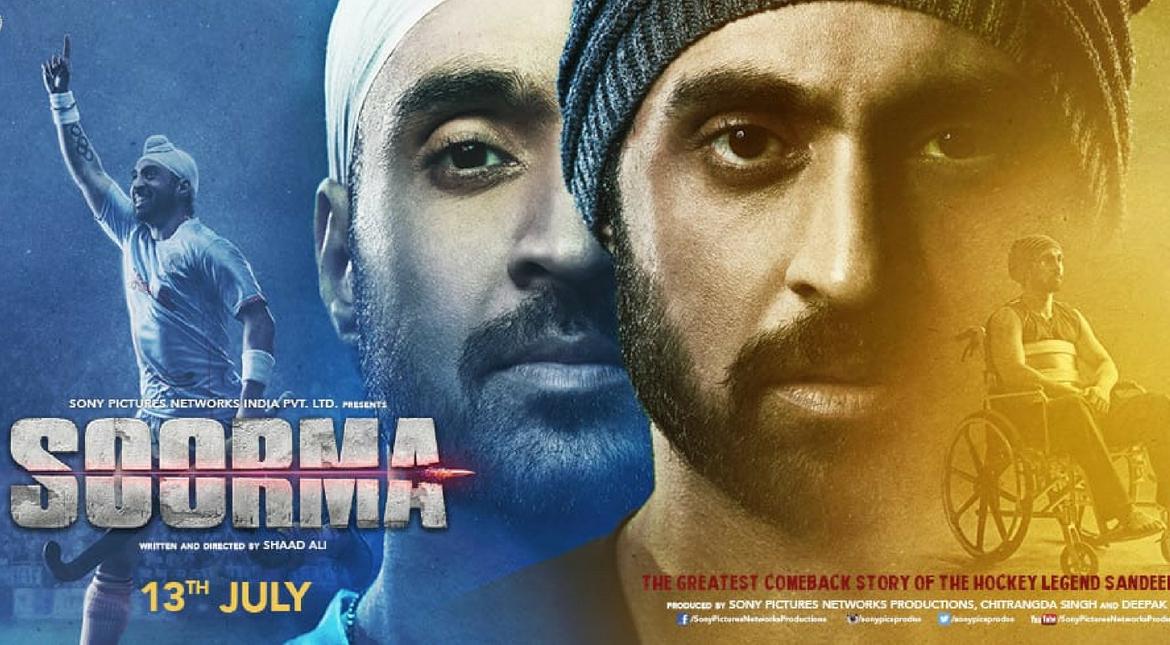 Soorma is a biographical film based on the story of iconic Indian hockey player, ex-captain and Arjuna Award winner, Sandeep Singh.

While the film can be called a biographical film, it’s not precisely a sports film. The story concentrates on his life from childhood, with the intense ups and downs and his ultimate win over a major health setback.

The little boy from Shahbad, a town where most youngsters inspire to be hockey players, Sandeep looses interest in the game due to an extremely harsh and unfair coach.

Years later, his love interest in a female hockey player leads him back to the game and fame. An unfortunate accident gets him accidentally shot and paralyzed waist down. With undaunted support from family and heartwarming support from the sports federation (Kulbhushan Kharbanda) and his coach (Vijay Raaz) he goes for rehabilitation and bounces back to health and the game in all his glory.

Why it wouldn’t qualify as a sports film is because of the lack of training nuances and focus on the game in the movie. Well, I would say that Chak De had more of the game, training and techniques.

But, what gives Soorma its charm is the simplicity and honesty of storytelling. It seems director and writer, Shaad Ali made it a conscious choice to focus on the personal life of Sandeep (Daljit) and how he overcomes the highs and lows of life.

Not that there were any major lows or struggles in life except the horrific firing accident. He seemed to be a naturally-gifted player who was lucky to have unflinching professional and personal support from his brother Bikramjit Singh (Angad Bedi), and a great supportive coach Harry (Vijay Raaz).

Also Read: Watch these movies, as you cool your heels for the FIFA WC finals

His love interest Harpreet (Tapasee Pannu) was a major reason for him to find a goal in life and for scoring goals later on.

The simple yet endearing storytelling keeps us hooked and engaged right from the beginning. While some might call it a tad predictable, but, I would rather defend that its not a thriller but a real life story that many of us know or have googled by now. In place of  grilling training sessions, Shaad entertains us with simple-hearted innocence and humour well portrayed by Daljit.

When tragedy strikes, the pain and the calamity that befalls the family has you pulled down. The fine team of able actors playing his family (including Satish Kaushik as father) keep us emotionally invested. When he stands back on his feet and when he’s back to the game, the hoots, the claps and the cheers of the audience were a proof that the story hit the right chord with the audience. There was no lack of overwhelming teary eyed moments.

Apart from the simplicity of the storytelling, another major reason for the movie being good are the performances.

Daljit has anyways mastered the portrayal of simple-hearted characters.

Angad Bedi is the is the surprise package in the film. Seen in his most major role till date, the actor is all noticeable and impressive with his nuanced portrayal of Bikramjit. It would be a pleasure to see him in more such deserving roles.

Vijay Raaz is the second actor apart from Angad who makes it worthwhile. He was a delight to watch in every frame that he was in. With some amazing dialogues some of which had us in splits or in applause, he was a shining star.

Tapasee Pannu was good, though nothing great to write home about.

Satish Kaushik, Kulbhushan Kharbanda, were a great addition to the cast.

Music by Shankar-Ehsaan–Loy was good if not too great. It seemed to gel in with the mood and feel.

I found the movie a good watch. It’s definitely inspirational and re-emphasises the fact that a great player is always the result of lots of hard work, perseverance and most important of all, a lot of faith, love and support from family, friends coaches and of course the sport federations.

I would add that more than technical details, if the movie has been able to honestly portray a story without unnecessary melodrama and gimmicks while keeping the audience emotionally and entertainingly engaged, it can be surely termed as more than good without being overtly critical.