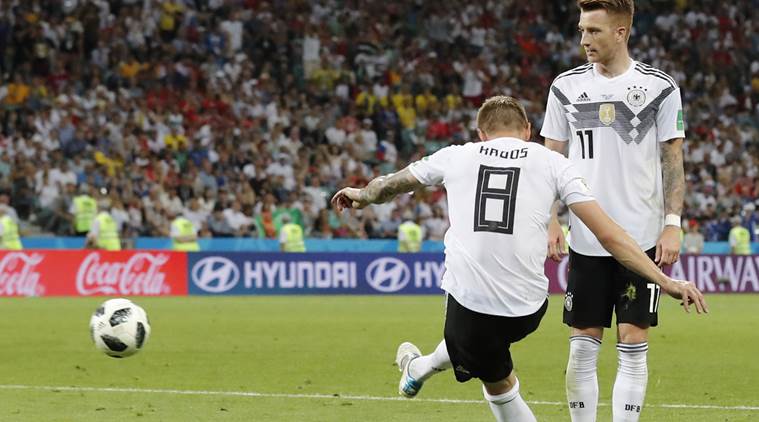 Moscow: Midfielder Tony Kroos’ sensational stoppage-time winner helped Germany revive their campaign with a dramatic 2-1 win over Sweden in a Group F match of the ongoing 21st edition of the FIFA World Cup at the Fisht Stadium in Sochi on Saturday.

Coming back from a humiliating 0-1 defeat against Mexico in their opening match of the tournament, the defending winners dazzled Sweden with its swift passing in the opening exchanges and kept its cool till the last minute of the game – when Kroos’ goal managed to keep them alive in the World Cup.

Kroos found the net with a curling set-piece in the 95th minute of the game, that brought out the best and worst of Germany, who were reduced to 10 men after Jerome Boateng was sent off with eight minutes remaining.
Ola Toivonen gave Sweden the lead with a superb finish in the 32nd minute.
Following that, Germany displayed large doses of their famed fighting spirit as they staged a strong comeback in the second half with Marco Reus scoring the equaliser in the 48th minute.
The rest of the game saw the Germans dominate as they created and wasted a lot of chances. The Swedish defence also did well, holding the defending champions at bay.
The result leaves Group F wide open with no team yet mathematically through. Mexico lead the way on six points, while Germany and Sweden are on three, and South Korea still on zero.
Germany will next face South Korea in their final group engagement on June 27. Meanwhile, Sweden next take on Mexico on the same day.