Home Face Off The Goal Factory 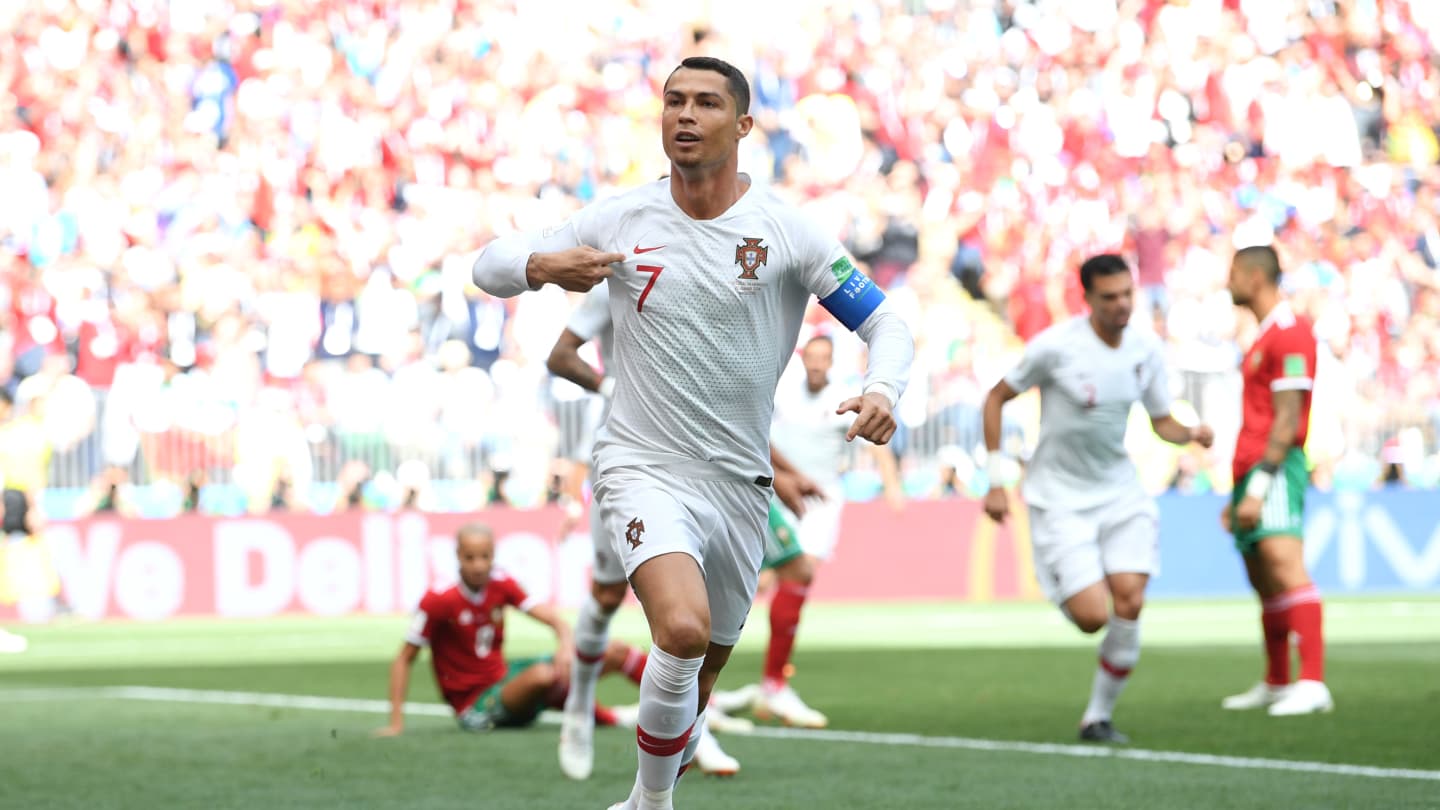 He is the ultimate embodiment of the superstar lifestyle: fast cars, beautiful women, millions of fans, lots of critics and the hopes of a nation on his shoulders.

With an insatiable appetite for goals, truly immense physical strength, lightning speed, a fierce shot with both feet and a fine header of the ball, he is a constant threat for opposing defenders.

He is the first Portuguese footballer to win five Ballon d’Ors, and the first player to win four European Golden Shoe awards. 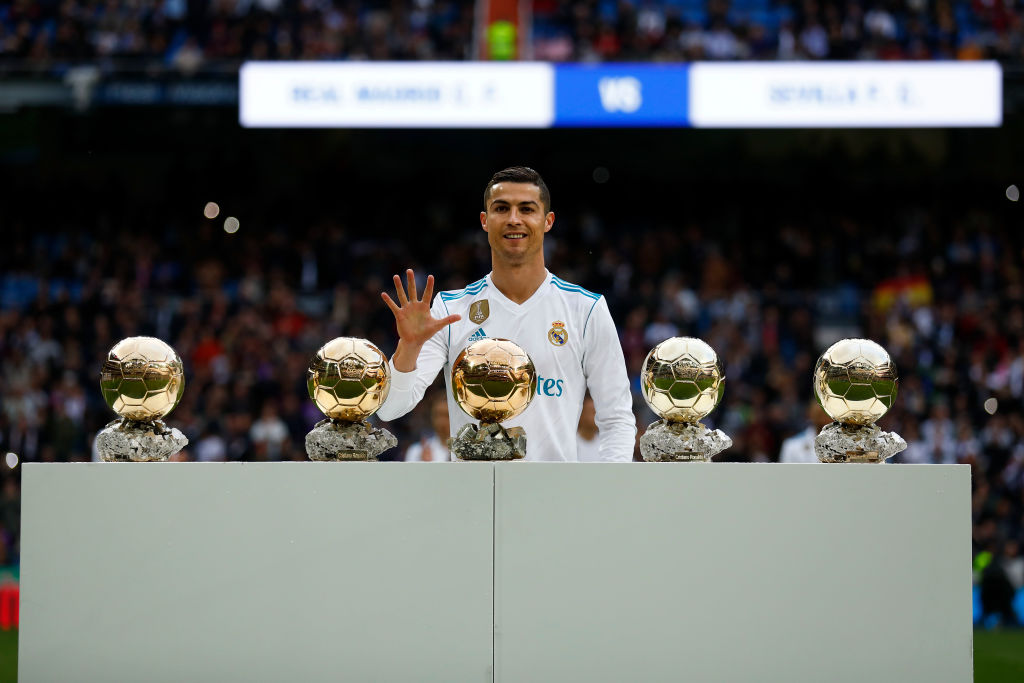 Cristiano Ronaldo dos Santos Aveiro was born on February 5, 1985, in Funchal, Madeira, Portugal, a small island off the western coast of the country.

He grew up in a largely working-class neighbourhood, his home a small tin roofed shack that overlooked the ocean. 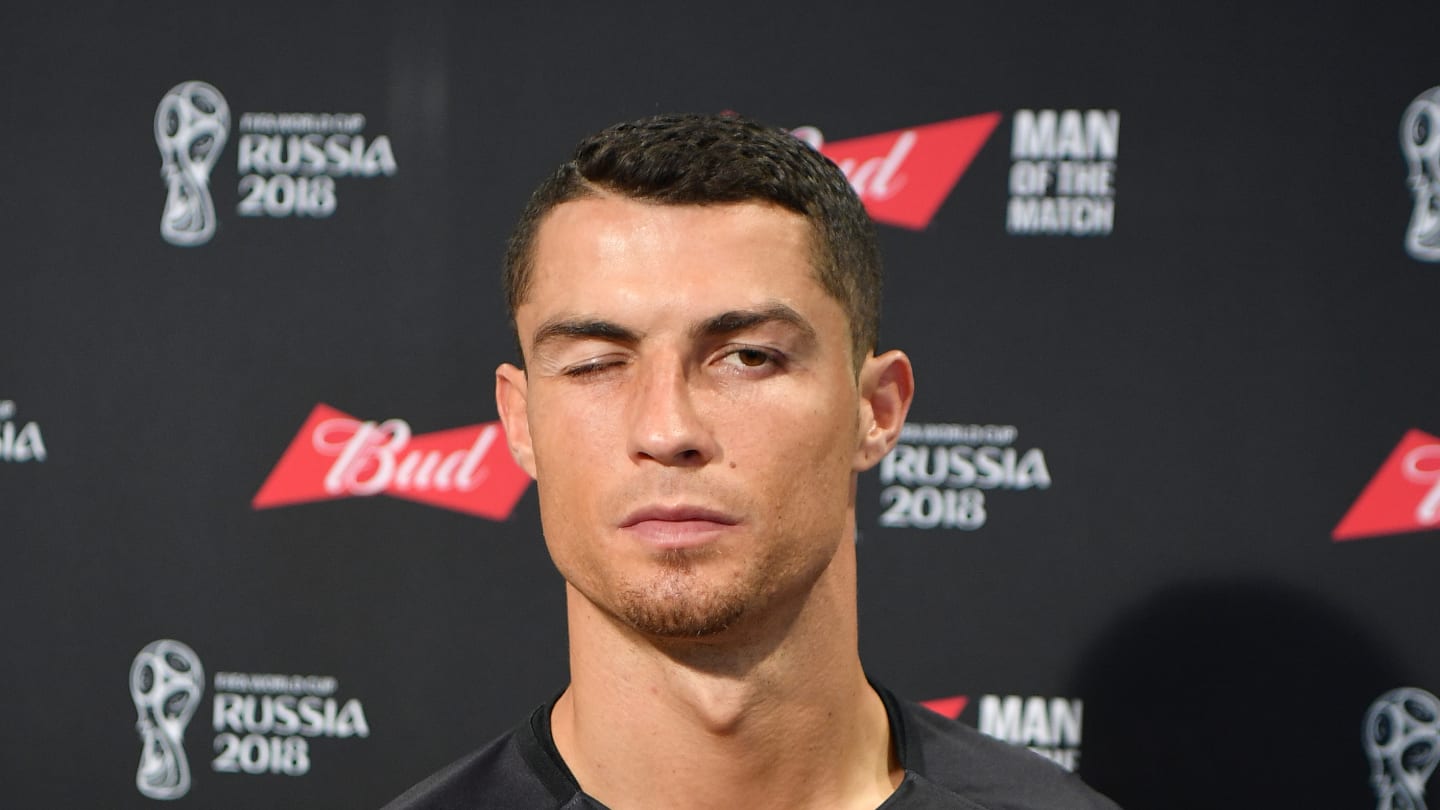 He was popular with other students at school, but he was expelled after he threw a chair at his teacher.

Young Ronaldo’s talent was very apparent even from a young age. By the time he was 10 years old, he had been accepted into the CD Nacional Madeira youth team, a local Portuguese club. He quickly rose to be one of the top players in the league. By the time he was 12, he was considered the best player on the team.

At the age of 15, Ronaldo was diagnosed with a racing heart. This threatened to end his soccer playing entirely. 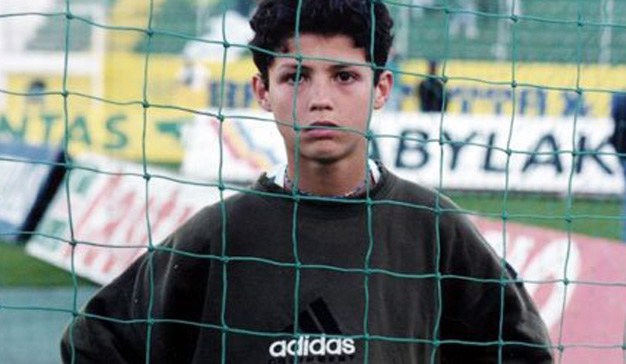 When this information reached the sporting staff, they authorized Ronaldo’s mother to take him in for surgery. Fortunately, the surgery was successful and he was back to training within a short period.

Ronaldo then went on to play for Sporting CP and became the only player ever to play for the club’s under-16, under-17, under-18, B-team, and the first team, all within one season.

At the tender age of 16, Ronaldo turned heads with a mesmerizing performance against Manchester United, wowing even his opponents with his footwork and deft skill. He made such an impression that a number of United players asked their manager to try and sign the young player. It wasn’t long before the club paid Ronaldo’s team more than £12 million for his services – a record fee for a player of his age.

Coach Sir Alex Ferguson eased the young player off the bench and eventually into the starting lineup, helping him adjust and learn the ropes during his first full season as a first-team player. 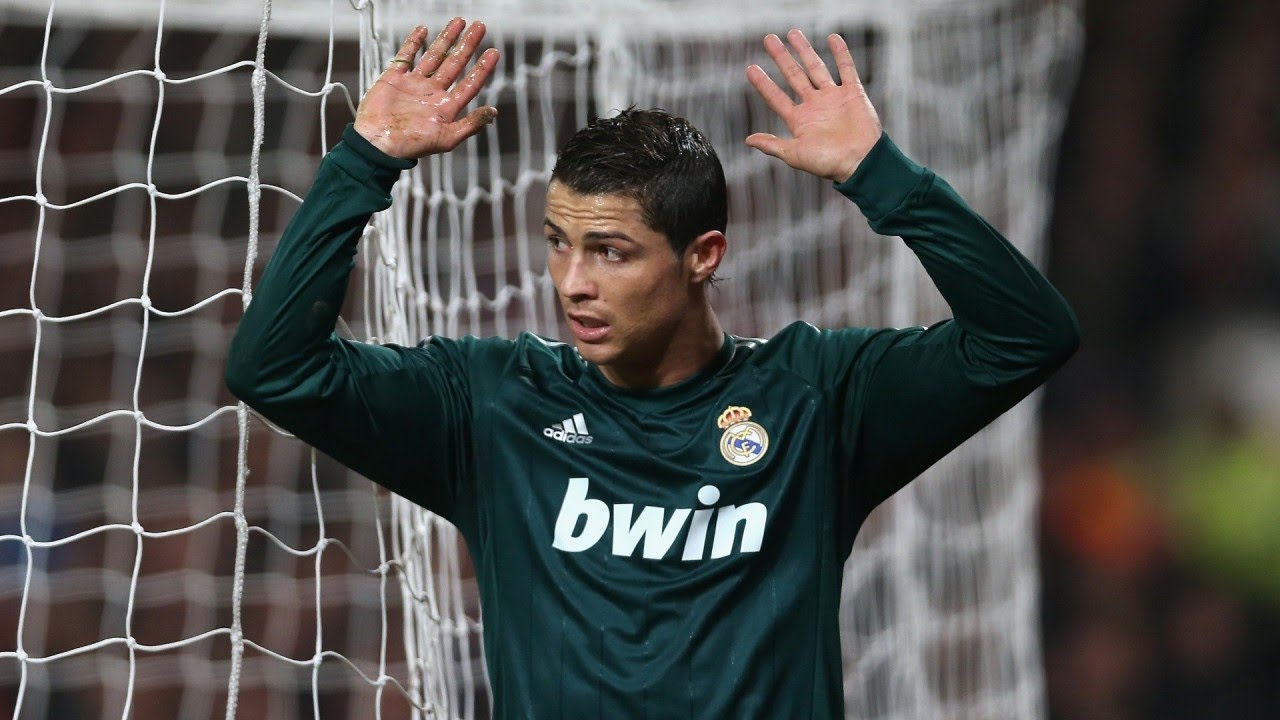 Ronaldo’s performance improved each year. As the number of games per season increased, so did his goals and performance.

Ronaldo dominated the English Premier League from 2006 to 2009, and then took on Europe when international glory arrived in 2008 with a UEFA Champions League title.

He became the latest football star and a household name. Ronaldo-mania took over from Beckham-mania as Ronaldo’s fan base grew.

In the summer of 2009, Ronaldo completed a record breaking €94 million transfer to Real Madrid. During his first season at Real Madrid, Cristiano Ronaldo scored 26 goals. The season was not very successful however as Barcelona won La Liga and Real Madrid fell out of Champions League at the hands of Lyon. 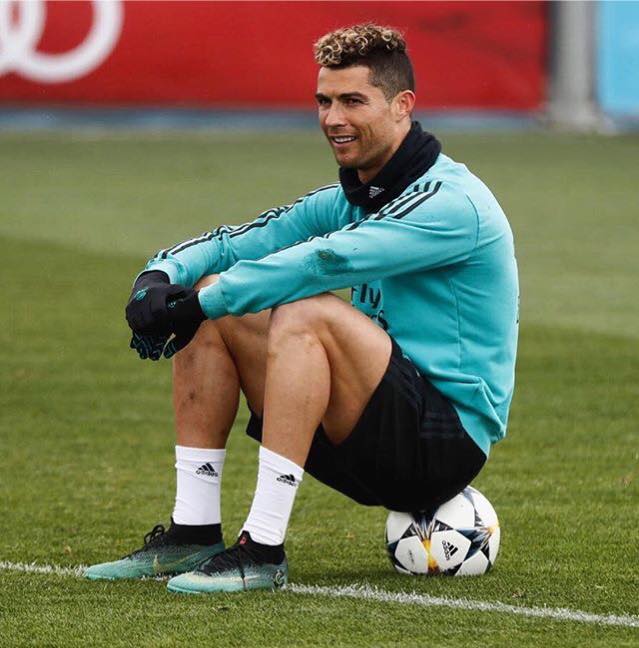 In 2011–12 Ronaldo helped Madrid capture a La Liga championship and scored a personal-best 46 goals during the League season. He scored a total of 66 goals in 56 appearances with Madrid and the Portuguese national team in 2013 to earn his second world player of the year award.

His prolific goal scoring record has lead to frequent comparison with Barcelona’s exceptional Lionel Messi. Sometimes, Ronaldo played up the rivalry, but at other times played it down.

After moving through the youth and under-21 ranks, Ronaldo had made his first appearance for Portugal’s full national team against Kazakhstan in August 2003.

He was criticised over his individual performance not translating into greatness for Portugal’s national team. Euro 2004 and 2008, World Cup 2006 and 2010 yielded little for Portugal with unremarkable performances from Ronaldo. 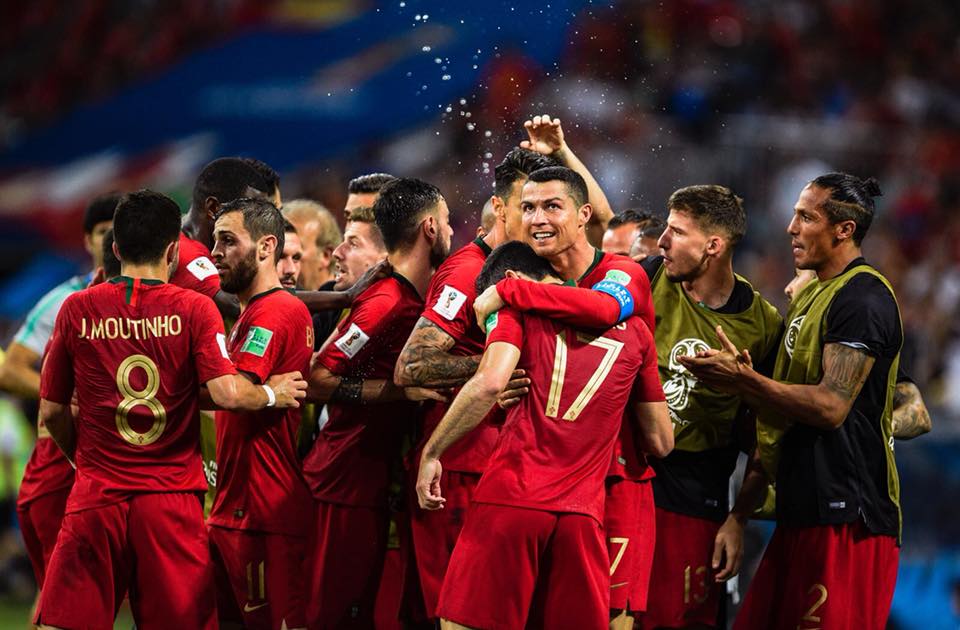 However, in 2012 his stellar play led Portugal to the semifinals of the European Championship, where his team was eliminated by rival Spain.

Ronaldo has said that he does not drink alcohol and he received libel damages over a ‘Daily Mirror’ article that reported him drinking heavily in a nightclub while recovering from an injury in July 2008.

He does not have tattoos as it would prevent him from donating blood, which he does several times a year.

In 2005, a month after his father died, Ronaldo was arrested on suspicion of raping a woman in a London hotel and released on bail. He denied the allegations and charges were dropped due to ‘insufficient evidence.’

Ronaldo has previously dated English models Alice Goodwin and Gemma Atkinson. In 2010, he began dating Russian model Irina Shayk, who he allegedly met through their Armani Exchange campaigns. The couple ended their relationship in January 2015.

He became a father in 2010 following the birth of a son. The child, named Cristiano, was born in the US, and Ronaldo announced that he had full custody. He has never publicly revealed the identity of his son’s mother. 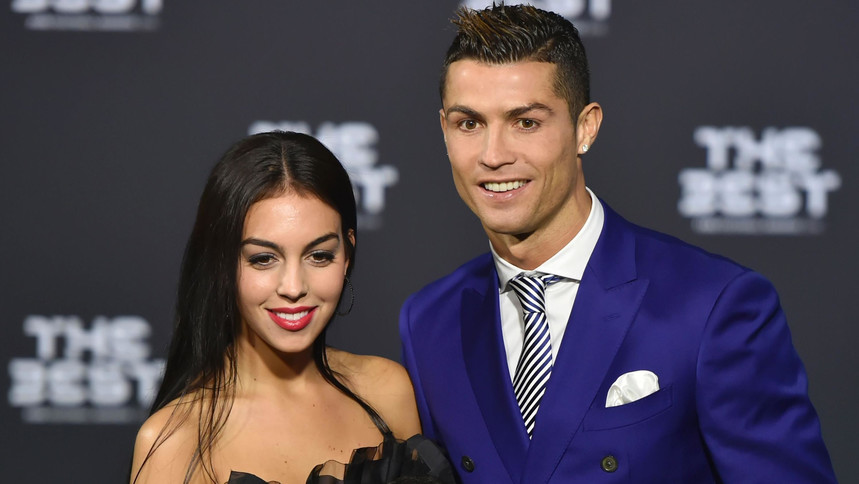 In June 2017, Ronaldo announced he had become the father to twins, a daughter Eva Maria and a son Mateo. Five months later, his girlfriend Georgina Rodríguez gave birth to their daughter Alana Martina. 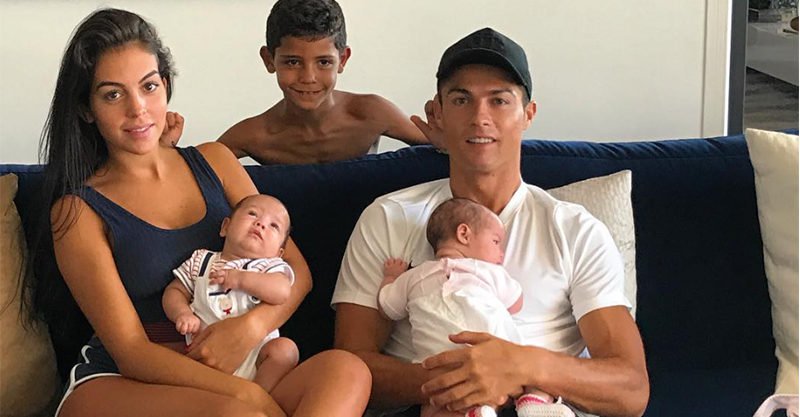 One of the most marketable athletes on the planet, Ronaldo has signed many endorsement deals as his reputation rapidly grew from his time at Manchester United.

In 2009, Ronaldo was named the new “spokesmodel” for Emporio Armani men’s underwear and jeans. In February 2010, he re-upped his endorsement contract with American sportswear company Nike until 2014.

He has worn Nike Mercurial boots his entire career, alternating between the Vapor & Superfly models depending on which is the top tier Nike boot at the time.

Since 2010 Nike have created signature Ronaldo boots, the first the Superfly II Safari CR7, and the latest in 2014 the Mercurial Superfly CR7.