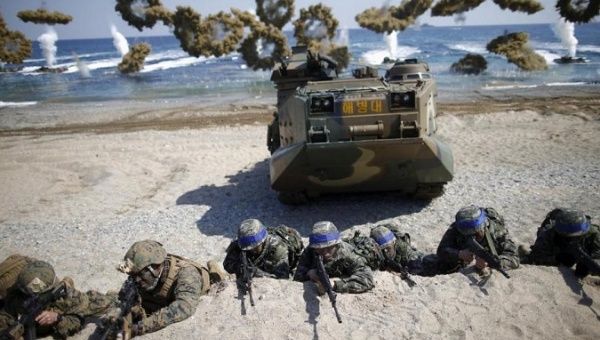 ShareTweetGoogleWhatsappPrint
Mail
The United States and South Korean have suspended a joint military drill that was scheduled to take place in August, the White House said on Monday.

This comes almost a week after the US President Donald Trump and North Korean Supreme Leader Kim Jong-un held a historic summit in Singapore. The Pentagon spokeswoman Dana White on Monday said the Pentagon has “suspended all planning” for the August joint military exercises with South Korea and several allies in the region.

“Consistent with President Trump’s commitment and in concert with our Republic of Korea ally, the United States military has suspended all planning for this August’s defensive ‘wargame’. We are still coordinating additional actions. No decisions on subsequent wargames have been made,” CNN quoted White as saying.

US Secretary of Defense Jim Mattis, Secretary of State Mike Pompeo and National Security Advisor John Bolton are to meet later this week to discuss the issue, White informed.

US President Donald Trump after his summit with North Korean leader Kim Jong Un on June 12, had said that the US would halt war games with South Korea.

South Korea and the US have been conducting combined routine training for years to prepare for a possible attack from the North.

ALSO READ:The world is going to see a major change, says Kim at the signing…

Trump and Kim, on June 12 signed a joint agreement, according to which Kim committed to ‘complete denuclearisation of Korean Peninsula’ a while Trump pledged ‘security guarantees’ to the North.