The Woman Grandmaster of India Soumya Swaminathan said she will not participate in the Asian Team Chess Championship to be held in Hamadan, Iran, from July 26 to August 4, because the compulsory-headscarf rule violated her personal rights.

“I find the Iranian law of compulsory Headscarf to be in direct violation of my basic Human Rights including my right to freedom of expression, and right to freedom of thought, conscience and religion. It seems that under the present circumstances, the only way for me to protect my rights is not to go to Iran,” she wrote on her Facebook page.

She further said that the religious dress codes should not be imposed on players. “I understand the organisers expecting us to wear our National Team Dress or Formals or Sporting attire for our games during official championships, but surely there is no place for an enforceable religious dress code in Sports,” she added.

Swaminathan, currently ranked at 97 in the world, was the Junior World Champion in 2009 and had has since won laurels for the country.

ALSO READ: Virat Kohli is among the highest paid athletes in the world, says Forbes 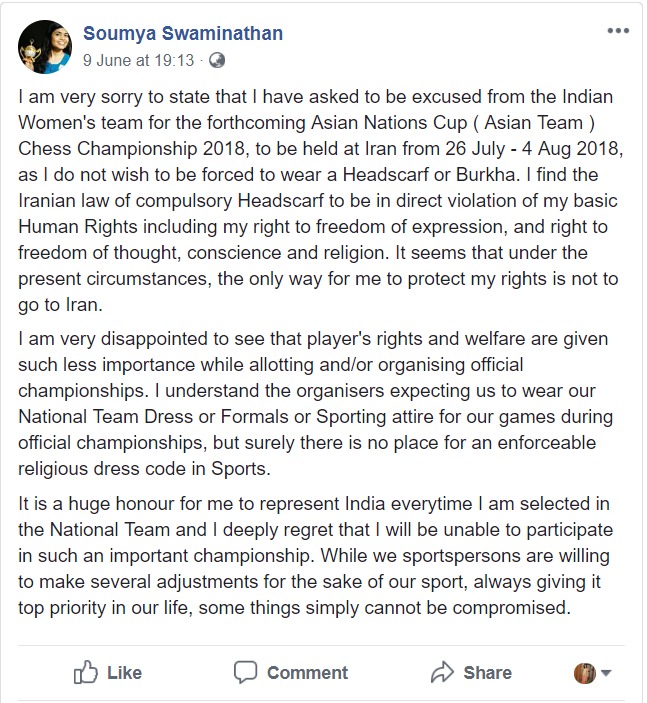 This is not the first time an athlete pulled out of an event over the same issue. In 2016, top Indian shooter Heena Sidhu had withdrawn from the Asian Airgun meet in Iran citing the same reason.