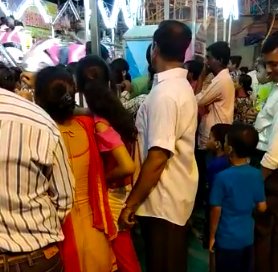 If people still believe that women are safe in public then you got to watch this disgraceful video where a middle-aged man is molesting a girl in a crowded place. You can make out in the video that the man is standing in a fair but he still has that audacity to molest the girl.

The man has not yet been identified but as it is making rounds on social media, it has caught the attention of West Bengal Police. While this may be one of the incidents that are caught on camera, there are thousands of girl being molested every day.