US President Donald Trump and North Korean leader Kim Jong Un signed an agreement after their historic summit on Tuesday in Singapore. It was an unprecedented, historic moment for the two leaders, who were engaged in a war of words involving nuclear weapons a few months back. 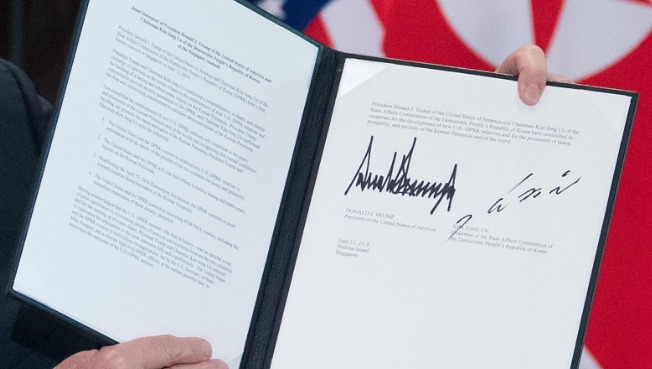 “It is a very important and comprehensive document. Both Kim and I are honoured to sign it,” said Trump. He said the details would be discussed in a press conference later in the day. “You will see the denuclearisation happening soon. A lot of goodwill, work and preparations went into it, he added.

“We are going to sign this historic document. The world will see a major change. I would like to express my gratitude to Trump to make this meeting happen,” said Kim.

“The whole situation with Korean Peninsula is going to be different. We spent a lot of intensive time together. It worked out far better than anyone expected,” said Trump.

The two leaders had one-on-one discussions for 45 minutes followed by delegation level talks and a working lunch. Kim and Trump took a walk in the lawns of the Capella Hotel in the island resort of Sentosa. Kim, who initially appeared reserved before the closed door meeting was smiling and looking more relaxed when the two took a walk. Trump spoke to reporters during the walk and described the meeting better than expected. Kim said anyone watching it would think it is a scene from a science fiction.