Home Trending Now Kim’s ‘running bodyguards’ are back in action 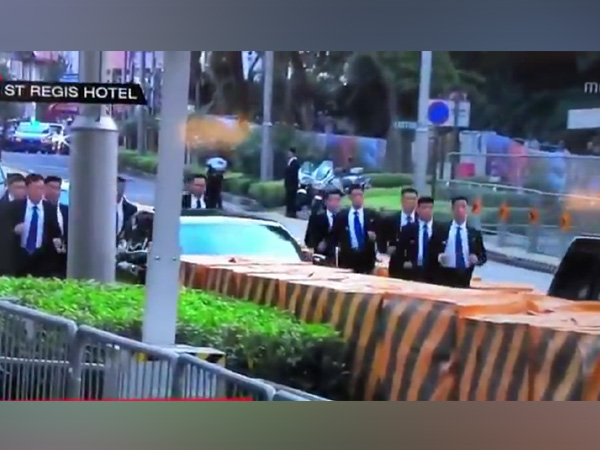 Singapore: The running bodyguards of North Korean leader Kim Jong-un, which made an appearance for the first time during the inter-Korean summit in April this year are now back in action, this time in Singapore.

Kim, who arrived in the city-state earlier today to participate in the much-anticipated meeting with United States President Donald Trump on June 12, was accompanied by an army of his running bodyguards, all decked up in black suits and blue ties.

ALSO READ: Trump arrives in Singapore ahead of historic summit

In a video posted by Tokyo bureau chief for the Washington Post, Anna Fifield, the bodyguards were flanking a black vehicle in which Kim was travelling and was jogging beside it, amid a score of onlookers, who were watching the unique protocol.

Back in North Korea, the running bodyguards always accompany any state vehicle Kim is travelling on and the same was evident during the inter-Korean summit.

In the historic meeting between Kim and South Korean President Moon Jae-in at the Demilitarised Zone (DMZ) on April 27, the North Korean leader was seen heading back to the northern side of the border for lunch session and was accompanied by 12 running bodyguards beside Kim’s black limousine car.

Earlier on Sunday evening, Trump arrived at Singapore’s Paya Lebar Air Base and is now staying at the Shangri-La Hotel. While Kim and his delegation are currently staying at the St. Regis Hotel amid heavy security.

ALSO READ: Kim Jong-un in Singapore ahead of summit with Trump

The two leaders are scheduled to meet for the first time on Tuesday at the Capella Hotel on Sentosa Island, where the process regarding denuclearisation of North Korea may kick-start in exchange for economic aid.

Trump has expressed keenness about his summit with Kim and called it a “one-time opportunity”.