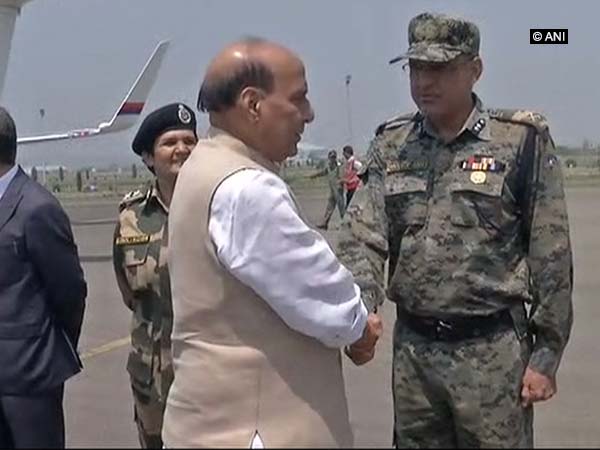 ShareTweetGoogleWhatsappPrint
Mail
Home Minister Rajnath Singh is on a two-day visit Jammu and Kashmir starting Thursday, with a high-level delegation of government officials. The visit comes amidst multiple issues causing turmoil in the state, such as cross-border firing, ceasefire violation, terrorist infiltration, attacks on security personnel and stone pelting incidents.

He is also expected to meet the Mehbooba Mufti, the chief minister of the state, who is likely to hold an Iftar party for the union minister.

“The visit of Home Minister is very important for us and we, in coordination with the Jammu and Kashmir Police, have made elaborate security arrangements. Our jawans will be on the ground, patrolling the area. Apart from that, all the important ingress points to Srinagar will have deployments,” Kashmir Inspector General of Central Reserve Police Force (CRPF), Ravideep Singh Shahi told ANI.

Meanwhile, residents of the state, especially the ones close to the border in places like RS Pura, have pinned their hopes of stability in the state lives on the delegation’s visit.

The state has been witnessing a tense situation, with incidents of stone pelting and terror attacks increasing by the day. Last month, 19 CRPF personnel were injured after their vehicle skidded off the road due to stone pelting in Jammu and Kashmir’s Srinagar.
In the same month, a tourist from Chennai died after being hit by a stone during clashes in Narbal area.

On Saturday, grenades were lobbed at security forces deployed at Pulwama’s Tahab Chowk, with three separate grenade attacks taking place within a span of around four hours in Srinagar.