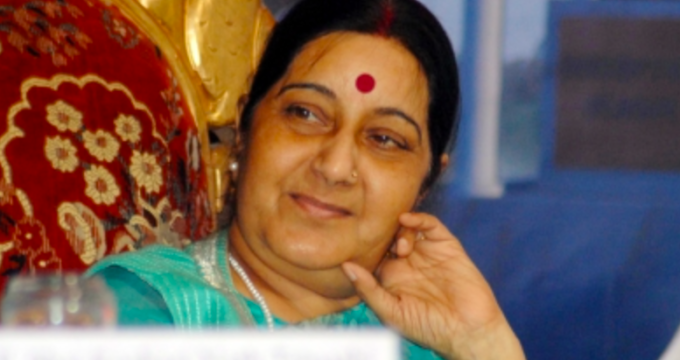 Durban: During her last leg of South Africa’s visit, External Affairs Minister Sushma Swaraj on Wednesday celebrated the bilateral connection with India by visiting the Mahatma Gandhi Institute of Computer Education and Information Technology at Phonix settlement in Durban.

ALSO READ: Inside Capella Sentosa where Trump and Kim will meet

The Phoenix Settlement was set up in remembrance of Mahatma Gandhi. It exhibits various articles related to Gandhi and imparts computer training to the students.

Swaraj along with foreign delegation then paid her respect to Mahatma Gandhi as she offered flowers to one of his busts.

The place exhibits various posters which mark the historic political landmarks in the world including the anti-apartheid movement in South Africa, Aung Sang Syu Kii’s fight for democracy in Myanmar, Anti-Vietnam war and so on.

Museum’s supervisor then briefed Swaraj about the place.

She then signed the visitors’ book as she wrote, “My respects to Mahatma and his humble abode where he practised clean and elementary living. From where were developed the concepts of Ahimsa and Satyagraha, mighty tools to shake the world. My sincere thanks to Gandhi Development Trust for keeping the invaluable legacy and heritage of Gandhiji drive in this beautiful country.”